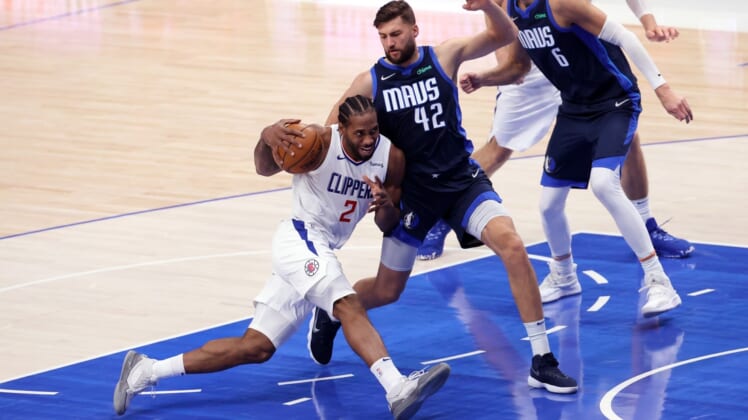 With Patrick Beverley (knee) and Serge Ibaka (back) out, the Clippers tried a new look in their second game in two nights. Nicolas Batum came off the bench for the first time this season and scored 12 points as Los Angeles won for just the second time in the past six games.

Ivica Zubac (15 points, 11 rebounds) made his second start of the season for the Clippers while Marcus Morris Sr. (14 points) started for the third time. Paul George had 15 points for Los Angeles while Lou Williams had 14 and Reggie Jackson added 12.

The victory avenged the worst loss in Clippers franchise history, a 51-point setback to the Mavericks on Dec. 27 in the teams’ third game of the season. Leonard missed that game due to a facial injury.

Luka Doncic produced 25 points, 16 assists and 10 rebounds for the Mavericks while Kristaps Porzingis added 22 points and seven rebounds. Tim Hardaway had 21 points off the Dallas bench.

One night after an uninspired effort at New Orleans, where the Clippers fell 135-115, they flashed much more energy in taking a 31-23 first-quarter lead while shooting 59.1 percent from the field.

The Mavericks closed the gap in the second quarter, leading by one point three times, but the Clippers were on top 55-50 at the break after shooting 54.8 percent. The Mavericks shot 52.5 percent in the opening half.

The Clippers started fast in the fourth quarter, pushing their lead to 90-78 on a Zubac dunk with 11:20 remaining.

The Mavericks pulled within 103-99 on a 3-pointer from Hardaway with 3:15 remaining, but Leonard converted a three-point play with 2:08 remaining to push Los Angeles’ advantage to 106-99. George hit a 3-pointer with the shot clock running out to give the Clippers a 109-99 advantage with 26.3 seconds remaining.