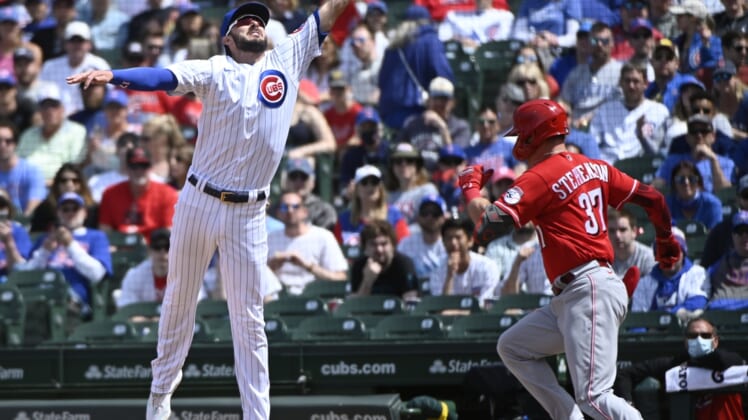 The Cincinnati Reds got to former Cy Young Award winner Jake Arrieta for the second time this season as they snapped the host Chicago Cubs’ six-game winning streak with a 5-1 win Sunday afternoon.

The Reds got things going early against Arrieta, whom they tagged for seven runs in 3 1/3 innings on April 30, by scoring three in the top of the first.

With one out, Jesse Winker singled and moved to second when Nick Castellanos singled to extend his hitting streak to 16 games.

Tyler Naquin’s sacrifice fly with the bases brought home Winker. The second run scored when, the bases loaded again, Castellanos crossed the plate after Tucker Barnhart was hit by a pitch.

Jonathan India pushed the score to 3-0 on an infield single with the bases loaded.

Arrieta settled in but gave up another run until Eugenio Suarez led off the fourth with a homer to left. Two batters later, Tyler Stephenson reached base on an error by third baseman Patrick Wisdom, advanced to second on a wild pitch from Arrieta, and scored on a single by Naquin.

That was it for Arrieta (5-5), who went 3 2/3 innings, giving up five runs (two earned) off six hits and four walks. He struck out three.

Cincinnati starter Tyler Mahle (4-2) baffled the Reds over five innings, allowing one hit and one walk and striking out eight.

Chicago got its lone run of the day in the eighth when P.J. Higgins walked, advanced to second on a single to left by Joc Pederson and scored on a Kris Bryant single to right.

Cincinnati ended with seven hits on Sunday, with Castellanos and India getting two apiece. Tejay Antone earned his third save of the season.

The Cubs will continue their six-game homestand Monday when the San Diego Padres come to Wrigley Field. The Reds head home for a three-game set with the Philadelphia Phillies.