Mookie Betts added an RBI triple, AJ Pollock an RBI double and Max Muncy an RBI single for the Dodgers.

Buehler (5-0) gave up only two hits, walked one and struck out two. Kenley Jansen got the final out for his 13th save.

For the Pirates, Bryan Reynolds and Michael Perez homered, and Adam Frazier hit an RBI double.

Pittsburgh starter JT Brubaker (4-5), pitching for the first time since May 29 after being on the bereavement list, gave up three runs and five hits in 4 2/3 innings, with no walks and six strikeouts.

The Pirates thought they had a 1-0 lead in the first. With one out, Ke’Bryan Hayes hit a shot to right off the foul pole for an apparent home run, but the Dodgers successfully challenged that he did not touch first base, and he was out. 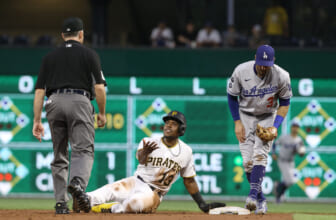 Los Angeles broke through in the fifth. Gavin Lux singled to right, where Gregory Polanco misplayed the ball, allowing Lux to go to third. Pollock doubled to center, driving in Lux for a 1-0 lead. Buehler then grounded out, sending Pollock to third. Betts tripled to right-center, with Pollack scoring to increase it to 2-0 and chase Brubaker for Chasen Shreve. Muncy’s single to right-center brought Betts home for a 3-0 edge.

In the sixth, Will Smith singled to right with one out in front of Taylor’s eighth homer, to left, to boost the lead to 5-0.

Pittsburgh scratched out a run in the eighth. Phillip Evans, just off the injured list, led off with a single to right, went to second on Kevin Newman’s groundout and to third on Ka’ai Tom’s fly out.

Frazier, on a ball to the corner in right, doubled home Evans to make it 5-1. That extended Frazier’s National League lead in hits to 77 and in doubles to 21.

Reynolds led off the ninth with his ninth homer, to center, to cut it to 5-2, and two outs later Perez hit his fourth homer, to right-center.