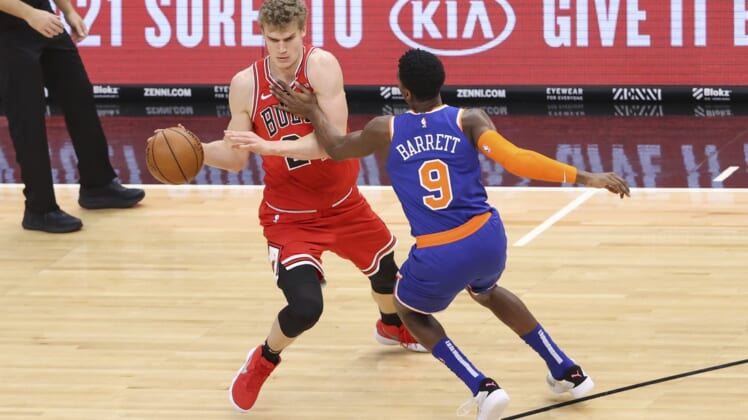 Lauri Markkanen scored 30 points and Zach LaVine netted 21 to help the host Chicago Bulls close out a 110-102 win over the New York Knicks on Monday night.

Thaddeus Young finished with 13 points, eight rebounds and eight assists for the Bulls, who finished the game on a 10-2 run.

Julius Randle then lost his handle on the ball on the ensuing possession and Markkanen came up with a steal. This led to a LaVine 3-pointer at the other end with 22.8 seconds left to all but seal the outcome.

Chicago prevailed in the first of back-to-back games against the Knicks at the United Center this week and moved the ball well throughout the game, finishing with 30 assists on their 42 made field goals.

White finished with 13 points, six assists and four rebounds, Daniel Gafford totaled 12 points and nine rebounds, and Patrick Williams added 10 points for the Bulls, who shot 47.7 percent overall from the field and 32.4 percent (11-for-34) from 3-point range.

The Knicks shot 42.5 percent overall but struggled from long distance, making just 20.7 percent (6-of-29) on 3-pointers.

Randle once again led New York with 23 points, 11 rebounds and seven assists, and RJ Barrett had 14 points and seven rebounds.

Rookie Immanuel Quickley continued to impress off the Knicks bench with 16 points, seven assists and six rebounds, and Alec Burks chipped in 18 points.

The Bulls took an early lead and led by as many as 11 in the first half.

Still, the Knicks battled back and took a brief 95-94 lead with 3:32 left in the fourth quarter on a 3-pointer from Quickley.

But Chicago had an answer in the clutch and excelled in transition, outscoring the Knicks 14-3 in fast-break points.