RECAP: Chicago Bulls rally from 25 down to defeat Detroit Pistons 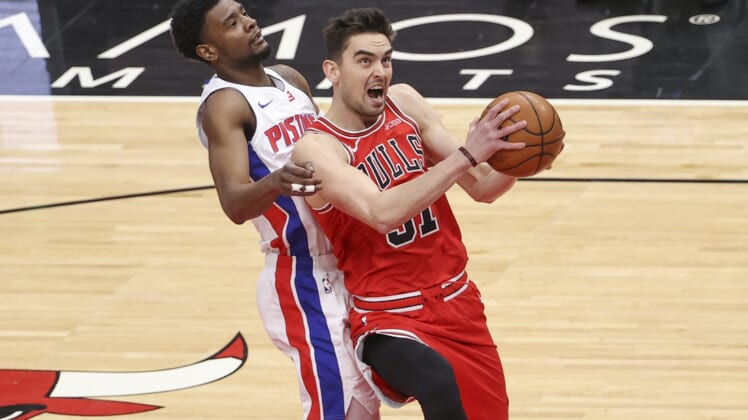 Zach LaVine poured in 37 points and the host Chicago Bulls rallied from a 25-point deficit to defeat the Detroit Pistons 105-102 on Wednesday.

The Pistons shot 54.5 from the field in the first half and stormed to a 61-43 halftime lead.

Grant led the way with 18 points, making all four of his 3-point attempts in the process.

Detroit scored 14 unanswered points, 12 at the beginning of the second quarter, to grab a 47-27 lead. Bey and Dennis Smith Jr. had five points apiece during that run.

Plumlee gave the Pistons their biggest lead of the half at 59-34 with a layup off a Wright feed. Chicago scored the last six points of the half, four from LaVine.

Chicago coach Billy Donovan shook up his lineup in the second half with only LaVine remaining from the original starting five.

That worked wonders, as Chicago outscored Detroit 27-12 during the quarter to pull within three points at 73-70. LaVine carried the offense, scoring 15 points. The Bulls’ defense held the Pistons to four points during the first eight minutes of the half.

Chicago also scored the first eight points of the fourth quarter. Garrett Temple’s layup with 10 minutes remaining put the Bulls on top, 74-73. A pair of Williams free throws made it 78-73.

Detroit cut its deficit to one with four minutes left but Williams answered with a three-point play.

Grant’s layup with 44.3 seconds left cut Chicago’s lead to two but Williams knocked down a 3-pointer to give the Bulls some breathing room.

Detroit was down 104-102 after Bey’s free throws with 9.2 seconds left. LaVine made one of two free throws but Wright missed a 3 just before the final buzzer.