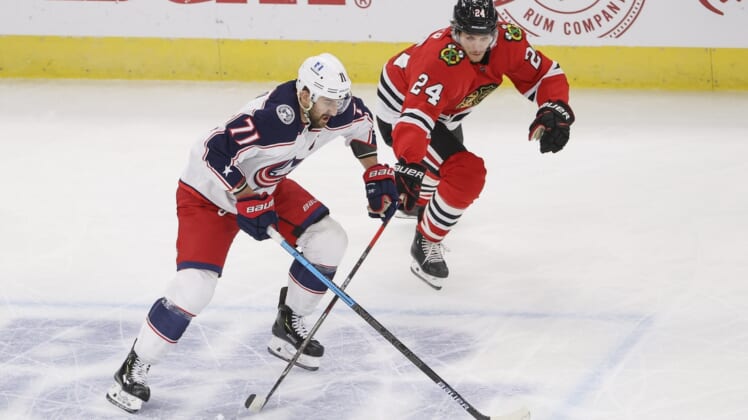 Pius Suter scored the go-ahead goal 7:41 into the third period to lift the host Chicago Blackhawks to a 3-1 victory over the Columbus Blue Jackets on Sunday.

Philipp Kurashev and Patrick Kane collected a goal and an assist apiece for the Blackhawks, who snapped a three-game skid (0-1-2) and avenged a 2-1 setback to Columbus on Friday.

Kevin Lankinen made 32 saves to secure Chicago’s first win since a 6-2 romp over the Detroit Red Wings last Sunday. He has yielded two or fewer goals in each of his last five outings.

Columbus goaltender Elvis Merzlikins misplayed the puck on two occasions in the third period, with the miscues directly leading to a pair of goals. Merzlikins turned aside 33 shots and Boone Jenner scored late in the first period for the Blue Jackets, who saw their seven-game point streak (4-0-3) come to a halt.

The Blackhawks took advantage of Merzlikins’ first miscue to secure a 2-1 lead.

Merzlikins unsuccessfully played the puck into the corner, with Suter alertly firing a sharp-angle shot from behind the goal line that caromed off the netminder and into the net. Suter’s goal was his fourth of the season and first since his hat trick against the Red Wings last Sunday.

Merzlikins apparently didn’t learn his lesson, as he fumbled the puck behind his net six minutes later. Kane made him pay by scoring from a sharp angle for his fourth goal of the season.

Kane deftly one-touched Mattias Janmark’s centering feed to Kurashev, who shoveled the puck home from the left doorstep to open the scoring with 7:28 remaining in the first period. The goal was Kurashev’s third of the season.

The slim advantage held for nearly five minutes until Jenner cleaned up a rebound following Columbus native Jack Roslovic’s drive to the net for his third goal of the season. The assist was the first point for Roslovic, who was acquired in the Patrik Laine-Pierre-Luc Dubois trade.

Speaking of Laine, he is expected to be in the lineup on Tuesday when the Blue Jackets host the Dallas Stars.