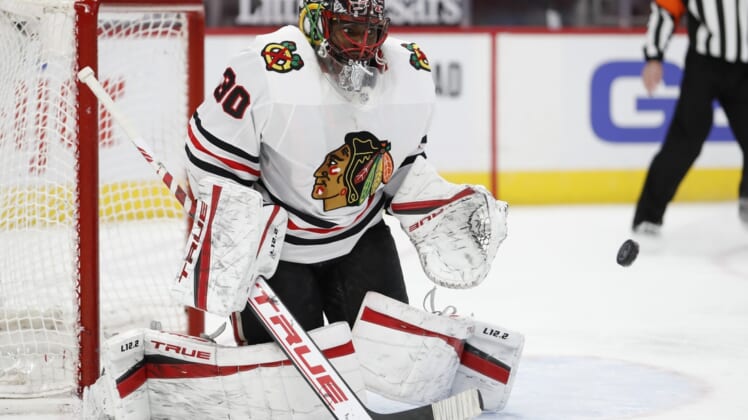 Dominik Kubalik scored two goals, including the game-winner with 17 seconds remaining in overtime, to give the Chicago Blackhawks a 3-2 win over the Detroit Red Wings on Monday.

Chicago’s Pius Suter hit the goalpost earlier in the overtime session. He soon found himself on a 2-on-1 with Kubalik, who scored from the right circle off Suter’s setup.

Mattias Janmark scored the Blackhawks’ other goal, while Malcolm Subban made 27 saves. Chicago has won five of its last six games, with four of those victories coming in overtime.

Both sides came up empty on the power play, with Chicago going 0-for-3 while Detroit went 0-for-2. The first two meetings this season resulted in lopsided victories for the Blackhawks but this one was tight throughout.

Janmark’s sixth goal this season at 4:19 of the opening period gave Chicago an early lead. Carl Soderberg moved around the Wings net, drew a crowd and then shoveled a backhanded pass to Janmark, who beat Greiss on the short side. Nikita Zadorov had the second assist.

Kubalik tapped in his fourth goal at 16:09 of the period. Brandon Hagel stole a pass at center ice, skated in along the right side, then backhanded a pass to Kubalik in front.

The Wings scored with 15 seconds left in the period. Namestnikov flicked the puck toward the net. It deflected off Patrik Nemeth’s skate, then off Subban’s pad and finally toward Namestnikov’s stick, who notched his fourth goal. Sam Gagner had the second assist.

Neither side scored in the second period, though Chicago’s Patrick Kane banged a shot off the crossbar.

Djoos tied the game at 2-all at 5:49 of the third. He faked a shot on the right side, moved to the left circle and fired the puck over Subban’s shoulder. Frans Nielsen and Adam Erne were credited with assists.

The teams will play once again in Detroit on Wednesday night.