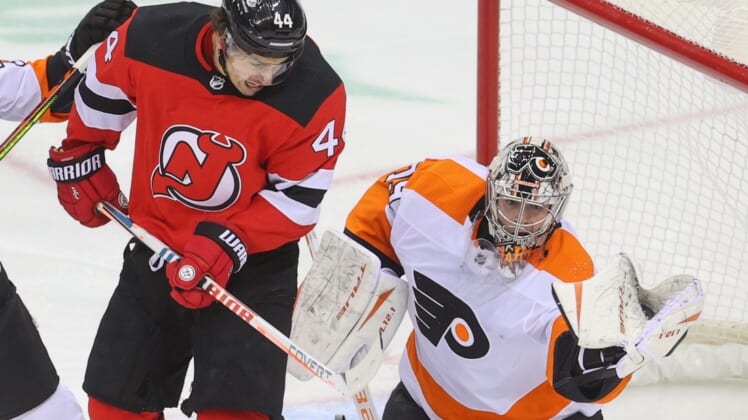 Carter Hart bounced back nicely from his worst performance of the season by stopping 33 shots and the visiting Philadelphia Flyers scored twice in the third period Thursday night en route to a 3-1 victory over the New Jersey Devils Thursday night in Newark, N.J.

Hart returned to the net for the first time since allowing six goals on 26 shots in a 6-1 loss at Boston on Saturday. It was a showing that frustrated him so much that he whacked the net numerous times with his stick, shattered the stick and tossed it across the ice after the game ended.

Hart entered Thursday with a 4.18 goals-against average and an .880 save percentage, but he was sharp most of the night, especially in the first two periods when the Devils outshot the Flyers 24-8.

Nate Prosser scored in the first period while Michael Raffl and Claude Giroux scored in the opening 6:26 of the third as the Flyers used third-period offense to beat the Devils for the second straight game after scoring three times in the third Tuesday.

Raffl snapped a 1-1 tie 2:10 into the third he scored on an easy tap-in from the right side of the net after Connor Bunnaman’s wraparound trickled through the crease. Giroux made it a two-goal game a little over four minutes later by lifting a slap shot from the left circle over the stick side.

Damon Severson scored for the Devils, who have dropped three of four without starting goaltender MacKenzie Blackwood, who has been on the COVID-19 list since shortly before last Thursday’s game against the New York Islanders.

Scott Wedgewood made 14 saves in his fourth straight start for Blackwood.

Despite the wide shot disparity, Hart continued to keep the game tied. He made a diving stop on a shot by Andreas Johnsson with about 11 minutes left and including three point-blank stops on Kyle Palmieri, whose shot from about 10 feet out was denied.