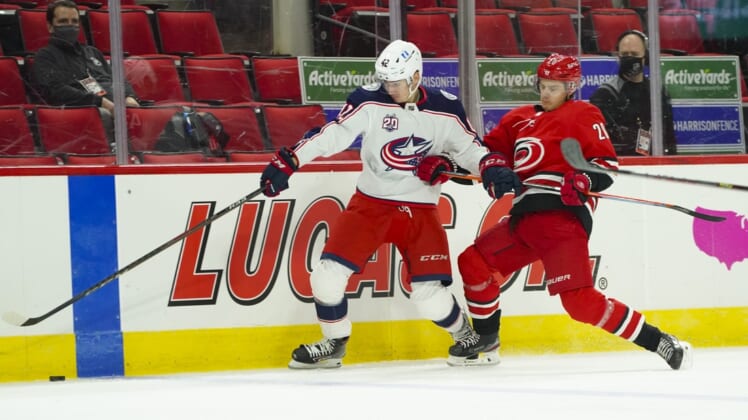 Brock McGinn scored two goals and Teuvo Teravainen had one goal and three assists as the Carolina Hurricanes recovered from a rough start to defeat the Columbus Blue Jackets 7-3 on Monday night in Raleigh, N.C.

The Hurricanes had their first lead less than two minutes into the second period when McGinn and Teravainen scored 29 seconds apart.

Sebastian Aho and Nino Niederreiter also scored for the Hurricanes, who trailed 3-1 less than 16 minutes into the game. Rookie defenseman Jake Bean posted two assists for his first NHL points in his sixth career game, and McGinn added two helpers.

This was a strong start to a five-game homestand for Carolina, which has won three straight overall.

Blue Jackets goalie Joonas Korpisalo, who made 20 saves, has allowed 11 goals in two outings covering five periods against the Hurricanes this season. He was pulled prior to the third period, with Elvis Merzlikins taking over in net.

Cam Atkinson, Boone Jenner and Kevin Stenlund all scored for Columbus in the game’s opening 16 minutes.

That 3-1 edge for the Blue Jackets turned into a deficit by the time just two minutes of the second period elapsed when McGinn and Teravainen tallied in quick fashion.

Teravainen has scored in the last two games after not producing a goal in his first eight outings of the season.

It wasn’t until Niederreiter scored on a power play with 47 seconds left in the second period for the game’s eighth goal that there was a score on special teams for either team.

Carolina improved to 6-0-0 when leading after two periods this season.

The Blue Jackets had a three-game points streak halted.