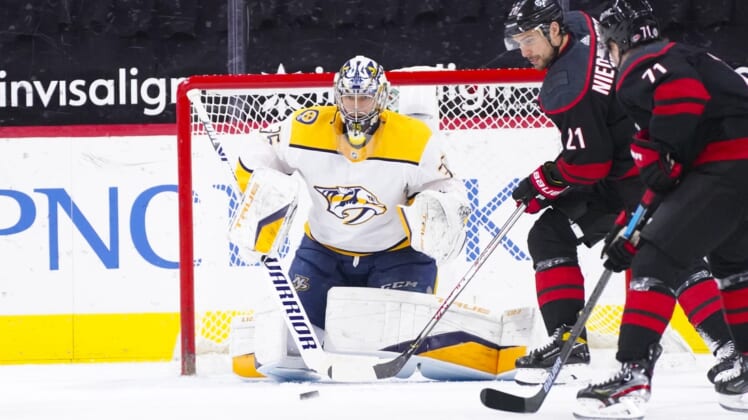 Jordan Staal scored his second goal of the game with 34.9 seconds remaining in overtime as the Carolina Hurricanes extended their winning streak to six games by defeating the visiting Nashville Predators 3-2 on Tuesday night in Raleigh, N.C.

Staal took the puck into the zone and faked a pass before sending the shot into the net in an overtime session otherwise mostly controlled by the Predators.

Sebastian Aho had a goal and an assist for the Hurricanes, who have their first six-game winning streak in 10 years. Vincent Trocheck had two assists, and Carolina goalie Alex Nedeljkovic made 21 saves.

The Predators scored first when Benning, a defenseman, tallied for the first time this season, blasting the puck through traffic 61 seconds into the second period.

It was Benning’s first goal with Nashville after joining the organization as a free agent in October. He has played in 25 of the team’s 26 games this season.

Johansen scored on a redirection off Dante Fabbro’s delivery at 13:37 of the second period.

However, after Fabbro knocked over Carolina’s Brock McGinn with a vicious hit and went to the penalty box for elbowing, the Hurricanes perked up. Staal scored on the power play at 14:58.

The game was tied on when Aho’s slap shot produced another power-play goal with 2:22 remaining in the second period.

The Hurricanes improved to 3-0-0 against the Predators. Nashville slipped to 1-3-1 in its past five games following a run on four wins in five games.

The Predators were playing in their second game of an eight-game road trip, with a rematch coming Thursday night in Raleigh.