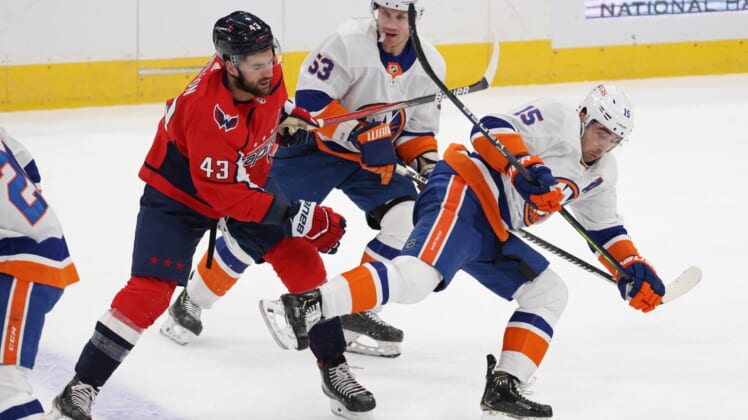 Conor Sheary scored twice to spark a five-goal second period Thursday night as the Washington Capitals rallied from a three-goal deficit for a 6-3 victory over the visiting New York Islanders.

The Capitals have now notched at least one point in each of their first eight games (5-0-3) of the season, setting a franchise record. The previous record came in 2011-12 when Washington won its first seven games.

For the Islanders, Josh Bailey played in his 872nd game with the team, which ties him with Clark Gillies for fourth place in franchise history. Also, Anders Lee played in his 500th game and became the 32nd Islander to reach that milestone.

The goals came in bunches in this game. New York jumped on top early with goals 18 seconds apart midway through the first period and went on to a 3-0 lead after one.

Oliver Wahlstrom posted his first NHL goal at 9:50 of the opening period, and the Islanders made it 2-0 when Casey Cizikas deflected a shot past Washington goalie Vitek Vanecek 18 seconds later. Lee made it 3-0 later in the period, and New York appeared to be in control.

But the Caps turned it around with a five-goal second period. Midway through the period, Sheary cut the lead to 3-2 with two goals 73 seconds apart.

Garnet Hathaway then snuck a long shot past goalie Semyon Varlamov, as Washington tied the game with three goals in just 2 minutes, 4 seconds. John Carlson gave the Caps their first lead at 4-3 with a power-play goal with 5:44 left.

Zdeno Chara completed the five-goal period with a long slap shot from the left side with 90 seconds remaining that put Washington in front, 5-3. Overall, the Capitals had 11 different players score at least one point in the second period.

Wilson added a long empty-net goal with 18.7 seconds left for the final goal.