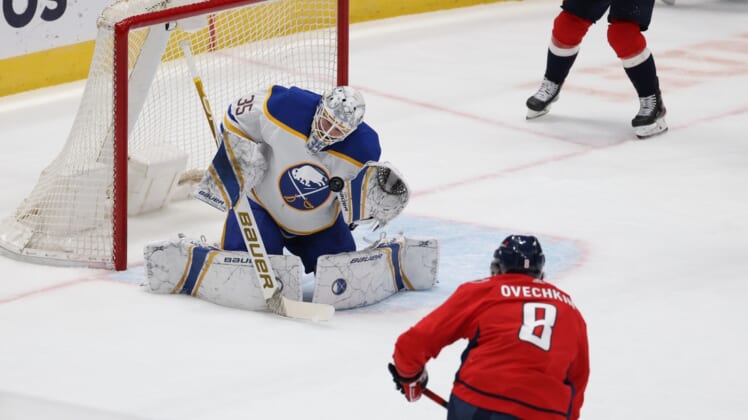 Nicklas Backstrom, Tom Wilson and Conor Sheary scored as the Washington Capitals recorded a 3-1 win over the visiting Buffalo Sabres on Thursday.

Washington improved to 4-0-1 against Buffalo this season. The Capitals have dominated the rivalry in recent years, posting a 16-2-2 record against the Sabres dating back to March 2015.

After struggling through a four-game losing streak the was interrupted by a weeklong COVID-19 hiatus, the Capitals have won their past two games.

The Sabres 0-4-0 in their past four games. Since returning from a two-week hiatus caused by a roster-wide COVID-19 outbreak, Buffalo has scored only two goals in three games and recorded its three lowest shot totals of the season.

Victor Olofsson recorded a power-play goal in the third period for Buffalo’s only score of the game.

In a microcosm of Buffalo’s season, offense was hard to come by without the man advantage. The Sabres have one of the league’s stronger power plays (14-for-45) this season but rank last in the NHL with only 15 goals in standard five-on-five play.

The Capitals relied on their own special teams unit for their first two goals of the game. Backstrom opened the scoring with a power-play marker 17:23 into the first period.

Wilson scored Washington’s first short-handed goal of the season at the 6:38 mark of the second period. Wilson forced a turnover during a Sabres power play and joined Nic Dowd on a two-on-none rush. Wilson kept the puck himself and sent a backhand shot past Linus Ullmark for his sixth goal of the season.

Sheary scored at 7:28 of the third period before Olosson replied four minutes later.

Vitek Vanecek made his 12th consecutive start for Washington and stopped 22 of 23 shots. The rookie goaltender’s emergence has been a major boost to a Capitals team that is still without regular starter Ilya Samsonov (COVID-19 protocol).

Backstrom extended his points streak to five games. The forward has three goals and four assists during the streak.