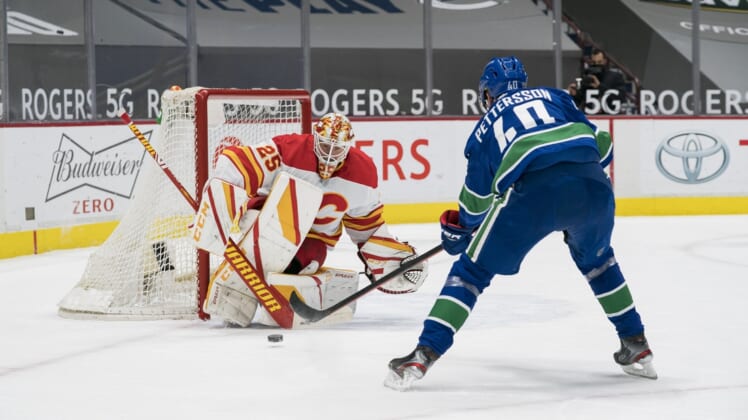 Tyler Myers scored a late game-winning goal and the host Vancouver Canucks snapped a six-game losing skid with a well-deserved 3-1 victory over the Calgary Flames on Saturday night.

With overtime looming despite Vancouver dominating from start to finish, Myers intercepted the puck in the neutral zone, worked into the zone, made it to the slot and found the mark with 5:11 remaining in regulation.

The clubs will play again in Vancouver on Monday and then meet in Calgary for a fourth consecutive outing two nights later.

Although he wasn’t as busy as his counterpart, Canucks goalie Thatcher Demko came up with some clutch stops in an 18-save performance, especially when he stood tall against Elias Lindholm late in the second period as well as against Juuso Valimaki midway through the third period while it was a 1-1 deadlock.

Brandon Sutter rounded out the scoring with an empty-net goal.

After a scoreless first period, Quinn Hughes tallied just before the midway point of the second period.

Shortly after the Flames killed a penalty, Hughes stepped up to steal the puck from Johnny Gaudreau just inside the Calgary zone, worked to the slot and ripped a shot off the post and into the net for his second goal of the season at 9:27 of the frame. It was Vancouver’s 29th shot on goal.

Despite the Canucks holding all the momentum, Sam Bennett answered for the Flames 75 seconds later.

Gaudreau redeemed himself with a terrific touch-pass to Bennett in the slot when most people would have shot, and Bennett wired the puck through traffic for his second goal of the season. It was only Calgary’s eighth shot on net.

The loss spoiled a brilliant 43-save performance by Flames goalie Jacob Markstrom.

While his team failed to record a shot on goal until 11:03 into the game, Markstrom stopped 20 shots in the first period and kept the Flames in the hunt despite his team surrendering the most shots on goal in a game and generating their fewest shots on the opposing goal this season.

The night was a double disappointment for the Flames, as Mikael Backlund left the game late in the first period after blocking a shot. The team reported it as a lower-body injury.

Despite going into the game on a winning streak, the Flames made a roster change. Connor Mackey made his NHL debut on defense.