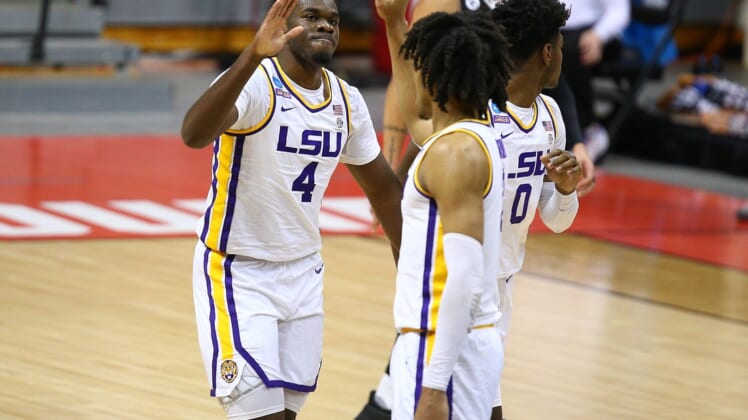 Cameron Thomas scored 27 points and LSU overcame a slow start to record a 76-61 win over St. Bonaventure in an East Region first round game of the NCAA Tournament on Saturday in Bloomington Ind.

Eighth-seeded LSU (19-9) advanced to meet the winner between top-seeded Michigan and 16th-seeded Texas Southern on Monday.

LSU scored the first seven points of the second half to grab a 38-22 lead.

Dominick Welch made St. Bonaventure’s first 3-pointer after the team missed its first 11 attempts from beyond the arc. That started a streak and three straight made 3s that helped the Bonnies get within 10 at 45-35.

They got within the halftime margin of nine before Watford answered with a three-point play.

The Tigers built the lead to 14 on two occasions midway through the half. They maintained a double-digit lead and Days’ 3-pointer put them in command with a 72-56 advantage with 3:51 left.

Both teams shot poorly to start the game, as St. Bonaventure held a 4-2 lead after nearly eight minutes.

After missing its first seven 3-pointers, LSU made three in a row to take a 15-10 lead.

Thomas got his first basket on a layup that gave the Tigers a 19-12 lead. He added three free throws to help build the biggest lead of the half at 29-18.

Lofton made a layup for his first basket after missing his first eight shots to get St. Bonaventure within seven before Javonte Smart’s jumper gave LSU a 31-22 halftime lead. It was the fewest points scored by the Bonnies in a half this season as they missed all 10 of their 3-pointers.