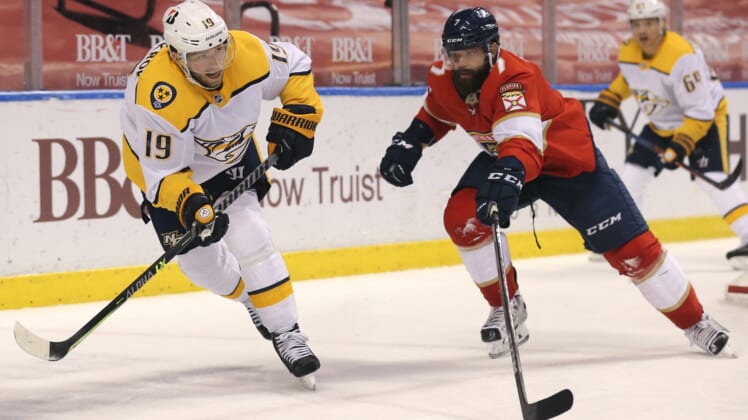 Calle Jarnkrok scored twice, leading the Nashville Predators to a 2-1 win over the Florida Panthers on Thursday night.

Juuse Saros made 40 saves to earn his first victory since Feb. 28. His best stop was on an Anthony Duclair breakaway in the third period, and Saros also got lucky when Aaron Ekblad hit the crossbar in the second.

Saros has allowed two goals or fewer in each of his past five starts.

Florida led 1-0 after Jonathan Huberdeau’s first-period goal, but Jarnkrok — who has nine goals this season — scored in the second and again early in the third.

Florida’s season-best, four-game win streak also was snapped. The Panthers fell to 16-1-2 when tied or leading after two periods.

Early on, Nashville had a couple of chances for goals denied. First, an apparent goal by Alexandre Carrier was wiped out when it was ruled that Eeli Tolvanen interfered with Bobrovsky.

Later in the first, Nashville had a five-on-three power play for 53 seconds, but Panthers forward Noel Acciari blocked three shots, including one off his left arm.

The Panthers then took a 1-0 lead on Huberdeau’s backhander on the rush with 1:22 left in the first. Florida’s MacKenzie Weegar batted the puck to center ice and Patric Hornqvist pounced, threading a perfect pass just over a diving Matt Benning, and Huberdeau did the rest.

Nashville tied the score with 7:25 expired in the second. After a teammate’s shot was blocked, Carrier picked up the loose puck and fed Jarnkrok in the slot. The pass bounced off the left skate of Jarnkrok, who then swatted the puck out of the air, getting it past Bobrovsky’s glove.

The Predators took a 2-1 lead just 77 seconds into the third. Bobrovsky tried to clear the puck from behind his net, but Nashville’s Mikael Granlund got to it and passed to Jarnkrok, who scored into the vacated net.

Florida pulled Bobrovsky with 1:52 left in the third, but the Panthers failed to get the equalizer. A holding penalty on Florida defenseman Keith Yandle with 19 seconds left helped to seal Nashville’s victory.