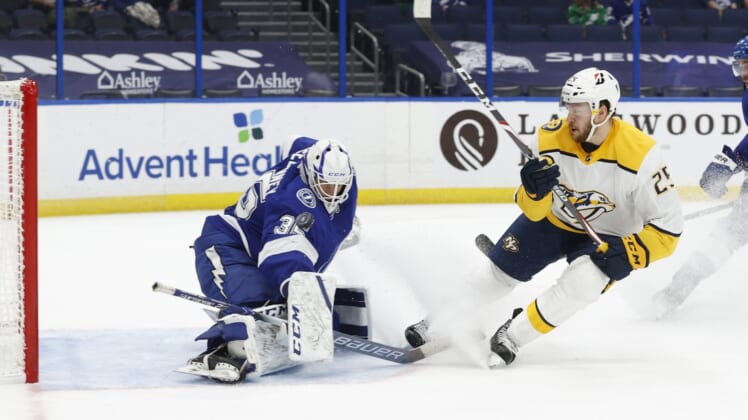 Calle Jarnkrok netted a short-handed goal and added two assists as the Nashville Predators broke through against Tampa Bay in a 4-1 win over the host Lightning on Monday afternoon.

The victory was the Predators first in six tries (1-5-0) against Tampa Bay and moved their record to 2-2-1 on an eight-game, 15-day road trip that will wrap up with games against the Florida Panthers on Thursday and Saturday before a March 21 game at Dallas.

The visitors scored three times in the second period — including one on the power play and another short-handed — as they dominated special teams play. They also killed off all three Lightning power plays.

Mattias Ekholm produced a goal and a helper, and Eeli Tolvanen and Viktor Arvidsson also scored for the Predators.

Pekka Rinne was brilliant in his eighth straight appearance, stopping 38 of 39 shots and recording an assist on Jarnkrok’s shorty.

Defenseman Dante Fabbro returned from a two-game elbowing suspension to bolster a rear guard hit hard by injuries, including a recent upper-body one to captain Roman Josi.

Opening a stretch of five games in seven days, the Lightning (19-6-2) received a tally from Steven Stamkos, and backup goalie Curtis McElhinney allowed three goals on 25 shots as they had their four-game home winning streak snapped.

After a scoreless first period in which each side produced 10 shots on goals, the Predators (12-16-1) went up 1-0 at 3:58 when Ryan Johansen sent a cross-ice pass to Tolvanen above the left circle. From the left dot, the rookie sharpshooter wired his a shot above McElhinney for his sixth goal of the season.

On the Predators’ second power play, their second unit saw Arvidsson end a strong shift by taking a pass from Erik Haula and beating McElhinney on the near post at 9:14 for a 2-0 lead.

On a clearing attempt by Ekholm on the home side’s third power play, the Lightning’s Brayden Point tried to keep a high pass in the offensive zone near the blue line by using a high stick, slowing the puck but having it skitter into the neutral zone.

Jarnkrok then made it 3-0 by gathering it, racing away all alone and wristing in his seventh tally at 11:46.

Stamkos scored at 10:03 of the third when his centering bounced off Fabbro’s skate and then Rinne’s stick for his team-leading 13th goal.

The Lightning pulled McElhinney at 3:20 for the extra attacker, but Ekholm’s empty-net goal with 20 seconds left punctuated the win.