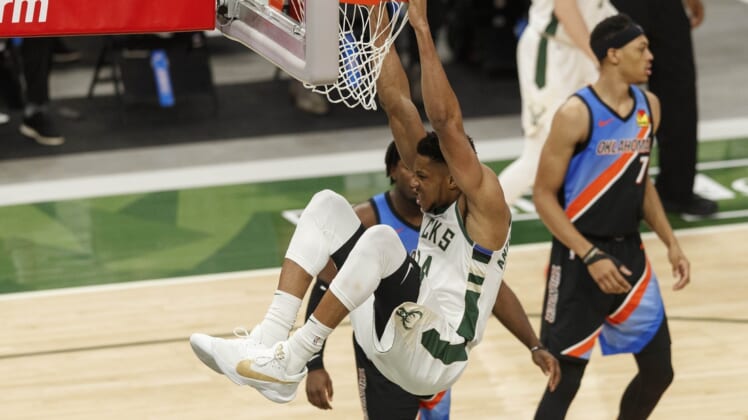 Milwaukee’s 98 points were its second-lowest of the season, but the Bucks made up for it on defense. Milwaukee hadn’t held an opponent under 90 points all season.

The Bucks grabbed control with a 21-5 run to start the third quarter, going 9 of 12 from the field in the first seven-plus minutes.

On the other side, the Thunder went cold. Oklahoma City missed its first 11 shots after halftime, not making a field goal until Hamidou Diallo’s put-back with 4:31 left in the third.

The Thunder were just 1 of 10 from behind the arc in the third, 6 of 21 from the floor overall.

Milwaukee’s Bryn Forbes, coming off the bench for the first time since Feb. 6, was scoreless at halftime before scoring 10 third-quarter points. He didn’t score again in the fourth.

Oklahoma City didn’t go away easily, chipping away at the deficit late in the third and into the fourth.

Isaiah Roby’s 3-pointer just more than five minutes into the fourth cut the Milwaukee lead to 81-73.

After their hot offensive start to the third, the Bucks hit just four of their next 19 shots.

The Thunder got as close as seven but couldn’t close the gap further.

Antetokounmpo’s rebounding total was a season high, and the Bucks dominated the boards 61-46. Antetokounmpo added eight assists and shot 10 of 20 from the floor.

The loss was the third consecutive and the sixth in seven games for Oklahoma City.

Luguentz Dort led the Thunder with 17 points while Shai Gilgeous-Alexander added 14. Roby, Al Horford and Hamidou Diallo each had 10 points.

The Thunder shot a season-low 36.5 percent from the floor and were just 11 of 21 from the free-throw line.