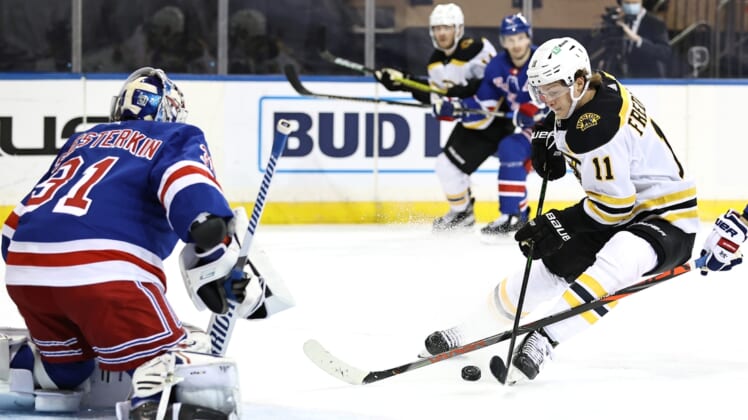 The Bruins won a chippy game that featured a combined 58 penalty minutes and three skirmishes — all in the second period. They extended their winning streak to a season-high five games and improved to 9-0-1 in their past 10 games.

Halak was seldom tested after making 10 stops in the first period, thanks to a defense that rebounded from allowing a season-high 35 shots Wednesday in a 3-2 overtime win over the Rangers. Halak recorded his 51st career shutout and fourth against the Rangers.

The Rangers were without leading scorer Artemi Panarin, who sustained a lower-body injury Wednesday, and they were blanked for the third time this season. New York also went 0-for-6 on the power play, took its third straight loss (0-2-1) and is 2-for-31 on the man advantage in its past nine games.

In the first period, the Rangers missed chances to score when Halak made a point-blank save on Kaapo Kakko with about 12 minutes left and then made a pair of glove saves on rookie Alexis Lafreniere midway through the period.

The Bruins outshot the Rangers 18-6 in a tetchy second period. Boston got the lead 9:27 into the period, about three minutes after Bruins defenseman Charlie McAvoy and New York defenseman Jacob Trouba had a brief tussle.

Kakko turned the puck over near the blue line in the defensive zone after being checked by Jeremy Lauzon. Lauzon moved the puck to David Krejci, who quickly found Ritchie crashing the net. Ritchie took the initial shot from the side of the net and scored when he reached for a loose puck at the right side of the net and tucked it off the left post.

New York seldom had scoring chances after the opening 20 minutes. The Rangers’ best opportunity came with about 10 1/2 minutes left in the third when Kakko was on a two-on-one, only to see his shot get deflected over Halak by Boston defenseman Brandon Carlo.