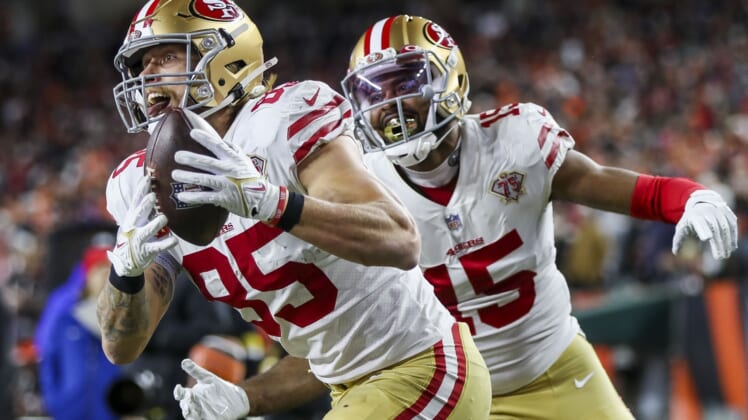 Brandon Aiyuk turned a swing pass into a 12-yard touchdown just after the two-minute warning in overtime Sunday, enabling the San Francisco 49ers to pull out a dramatic 26-23 victory over the host Cincinnati Bengals.

A fourth win in their past five games allowed the 49ers (7-6), despite being just the third-place team in the NFC West, to remain in the playoff chase with four games remaining.

Meanwhile, with a chance to move into a tie with the Baltimore Ravens atop the AFC Central, the Bengals (7-6) instead fell into a second-place tie with the Cleveland Browns.

After leading by two touchdowns in the fourth quarter, only to get caught in regulation, the 49ers were down 23-20 after Evan McPherson drilled a 41-yard field goal with 6:15 left in the extra session.

Joe Burrow, who threw for 348 yards in the game, had driven the Bengals 52 yards in seven plays for that go-ahead field goal.

But Jimmy Garoppolo capped a 296-yard, two-TD-passing performance by hooking up three times with George Kittle on the ensuing possession, including a 9-yarder to the Cincinnati 12 on a third-and-5 play.

Aiyuk then took a short pass on the left side and reached the ball across the goal line as he was being pushed out of bounds at the 1, a play that was deemed to be a touchdown on review after initially being ruled down a yard short.

Kittle finished with 13 catches for 151 yards and one TD in his second straight monster performance. He hauled in nine passes for 181 yards and two scores in a loss at Seattle last week.

Before getting to their first overtime game since Week 10 of the 2019 season, the 49ers had a chance to win in regulation, but Robbie Gould’s 47-yard field goal as time expired was wide right.

Gould’s shot at heroics came after Burrow rallied the Bengals from a 20-6 deficit with touchdown passes of 17 and 32 yards to Ja’Marr Chase in the final 9:20 of regulation.

The game-tying connection came with 1:19 to go, capping an 87-yard drive in just seven plays.

After getting TDs by Deebo Samuel on a 27-yard run and Kittle on a 14-yard catch in the second quarter, the 49ers took a 17-6 lead into the second half, and extended it to 20-6 on Gould’s second field goal of the day with 7:43 remaining in the third period.

The difference stayed at 14 until Burrow and Chase teamed to force overtime.

Burrow’s 348 passing yards were the product of a 25-for-34 effort and the two scores. Neither quarterback threw an interception.

The Bengals’ Joe Mixon was the game’s leading rusher with 58 yards on 18 carries.