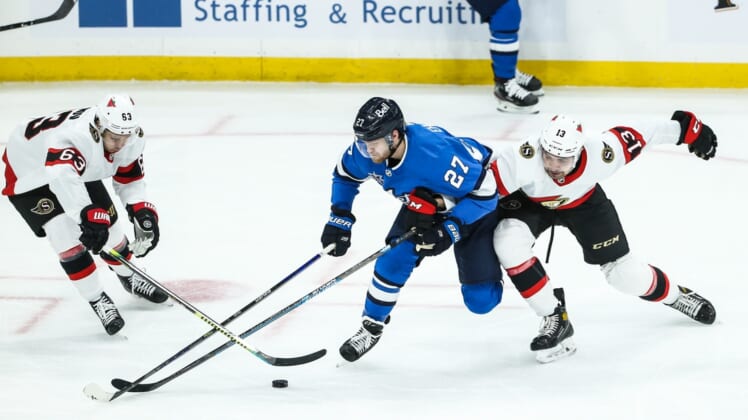 Brady Tkachuk scored with 8.2 seconds remaining as the Ottawa Senators snapped a four-game losing streak with a 2-1 victory against the host Winnipeg Jets on Saturday afternoon.

Evgenii Dadonov also scored for the Senators and goaltender Marcus Hogberg, filling in for the injured Matt Murray, made 30 saves. It was Ottawa’s first victory in five games against the Jets this season.

The winning goal came after Hellebuyck misplayed a long stretch pass, leaving the puck just out of the trapezoid behind the net. Ottawa’s Connor Brown gained possession and passed back to Mike Reilly at the left point. Reilly’s slap shot was redirected by Tkachuk and found its way over Hellebuyck’s right shoulder and into the net.

After a scoreless first period, Scheifele gave the Jets the lead at 5:43 of the second. Scheifele carried the puck out of the Jets’ own zone and passed to Kristian Vesalainen on the left wing at the Ottawa blue line. Scheifele continued skating to the far post and back-handed Vesalainen’s return pass over Hogberg’s glove.

The Senators tied the score less than two minutes later, at 7:29, after Winnipeg failed to clear the puck from its own end of the ice. Dadonov tipped Colin White’s backhander from the top of the slot over a sprawling Hellebuyck. Nick Paul also got an assist on the play.

The Senators were without Murray, who suffered an upper-body injury in Thursday’s 5-1 loss at Winnipeg. Murray departed after the second period after being involved in a collision with teammate Nikita Zaitsev.

Ottawa made a trade before the game, acquiring forward Ryan Dzingel from Carolina in exchange for forwards Alex Galchenyuk and Cedric Paquette. Dzingel began his career with the Senators after being their seventh-round pick in the 2011 NHL draft.