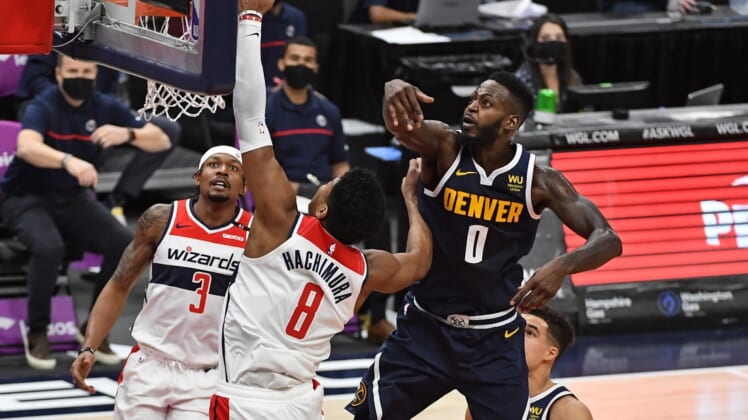 Bradley Beal had 25 points and 10 assists and hit two free throws with 0.1 seconds left, and the host Washington Wizards beat the Denver Nuggets 130-128 on Wednesday night.

Davis Bertans scored a career-high 35 points and went 9-for-11 from beyond the arc, while Russell Westbrook finished with 12 points, 13 rebounds and 12 assists. Raul Neto and Rui Hachimura scored 14 points apiece and Alex Len had 10 points and eight rebounds for the Wizards, who have won three straight.

Jamal Murray scored 19 of his 35 points in the fourth quarter, Nikola Jokic had 33 points and nine assists and Michael Porter Jr. and Facundo Campazzo had 14 points apiece for Denver.

The Nuggets rallied early in the fourth to get within a point on R.J. Hampton’s 3-pointer but Washington had an answer. Bertans hit a 3-pointer and was fouled on another attempt during a personal six-point run, and after a shot-clock violation, Westbrook drove in for a layup to make it 110-101 with 8:48 left.

Denver rallied. JaMychal Green’s 3-pointer cut the lead to 123-117 with 2:58 left and Murray scored his team’s next eight points, including a 3-pointer with 30 seconds left to tie the game at 128.

Bertans was fouled on a 3-point attempt and hit three free throws with 8.8 seconds left, but Murray answered with a long 3-pointer to tie it with 2.1 seconds left.

On Washington’s ensuing possession, Beal was fouled by Green, and he hit two free throws to win it.

Denver led by 20 late in the first quarter but Washington came back with a strong second. Beal scored 14 points in the period to help the Wizards take a 70-64 halftime lead.

Washington increased its lead to eight early in the third, the Nuggets got within three and Neto’s 3-pointer pushed the lead to 93-84 with 2:50 left in the period. Denver cut it to 95-91 but the Wizards took a 100-93 into the fourth quarter.