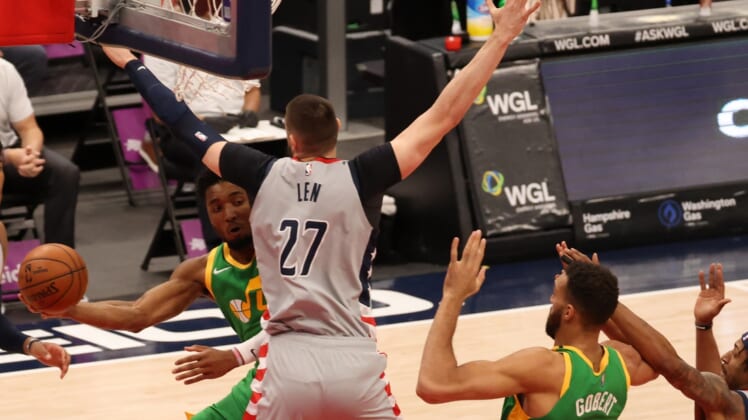 Bradley Beal scored 43 points on 16-of-24 shooting to lead the Washington Wizards to a 131-122 victory over the Utah Jazz on Thursday night.

The Wizards forced 17 turnovers and turned them into 24 points.

Donovan Mitchell scored 42 points and Joe Ingles added a career-high 34 points for the Jazz. Ingles matched a franchise record with eight made 3-pointers. Rudy Gobert chipped in 10 points and 13 rebounds.

Utah, which trailed by double digits for large chunks of the game, lost for the second time in three games and for the fifth time in eight games.

Starting point guard Mike Conley (rest) did not play, and the Jazz struggled to get their offense on track.

Washington quickly took advantage, scorching the nets during the first quarter. The Wizards hit 10 of their first 12 shots from the field and shot 65 percent from the field overall during the quarter. It added up to the Jazz falling into a huge hole after only a few minutes

Westbrook scored three baskets and assisted on two others to fuel a 13-0 run that gave Washington a 23-12 lead. He tallied 13 points and six rebounds by quarter’s end, when the Wizards were on top 31-20.

Once the Wizards surged ahead, they did not ease off before halftime. Washington led by as many as 24 points in the second quarter, going up 64-40 after Beal scored three baskets over a two-minute stretch.

Mitchell came alive in the third quarter to help Utah whittle down the deficit. He scored 20 points in the quarter, setting a career high for most points in a single quarter. The Jazz cut the deficit to 85-77 on back-to-back baskets from Mitchell.

Washington answered with a 12-2 run to snuff out Utah’s comeback attempt. Westbrook drove for a layup and dished to Hachimura for back-to-back baskets to punctuate the run and give the Wizards a 97-79 lead.

Utah scored baskets on five straight possessions in the fourth quarter and cut the deficit to 112-105 on back-to-back 3-pointers from Mitchell and Royce O’Neale. That’s as close as the Jazz got.