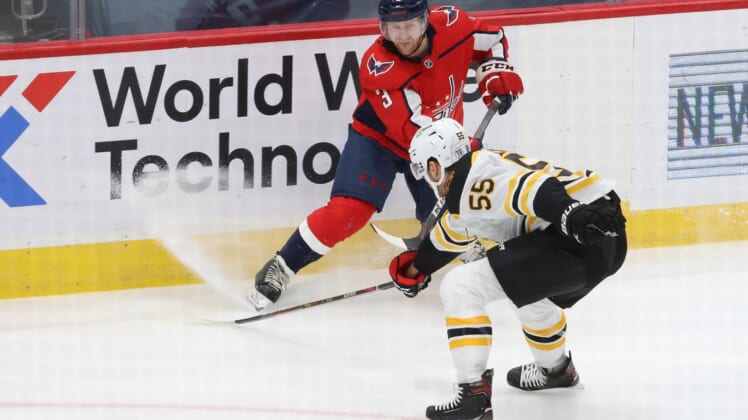 Brandon Carlo scored the tiebreaking goal late in the third period as the visiting Boston Bruins bounced back from an early three-goal deficit and defeated the Washington Capitals 5-3 Monday night.

This was Washington’s first regulation-time loss in the 2020-21 campaign, but fourth loss overall. The Capitals scored the game’s first three goals but a four-goal third period surge gave the Bruins the win.

But Dmitry Orlov returned after missing five games being on the Covid-19 list and helped stabilize the Caps’ defense. He had played 401 straight games before having to sit out those five.

The biggest goal during the third period came on a quick shot from Carlo just outside the crease with 2:37 remaining. That gave Boston a 4-3 lead, its first of the game,

Washington appeared to take a lead with just over eight minutes left in the first period on a Carl Hagelin deflection. Boston challenged the play, and offsides was ruled, wiping out the goal.

The Caps then broke through with the two quick goals a little over two minutes later. Former Bruins captain Zdeno Chara made it 1-0 with a long bullet from near the blue line with 6:34 remaining.

Then, 11 seconds later, it was 2-0 when Daniel Sprong worked his way through traffic and scored from near the right circle.

Washington increased the lead to 3-0 when John Carlson beat Jaroslav Halak (23 saves) on a shot from the high slot 8:35 into the second period for a power-play goal.

Boston finally got on the scoreboard later in that period when David Pastrnak put a shot from near the right circle past Vitek Vanecek, who had 28 saves, with 7:23 remaining.

Pastrnak struck again early in the third period on a goal from the high slot at 6:08, and that cut the lead to 3-2. Craig Smith tied it for the Bruins with 6:53 left before Carlo’s tie-breaker, and Brad Marchand added an empty-net goal.