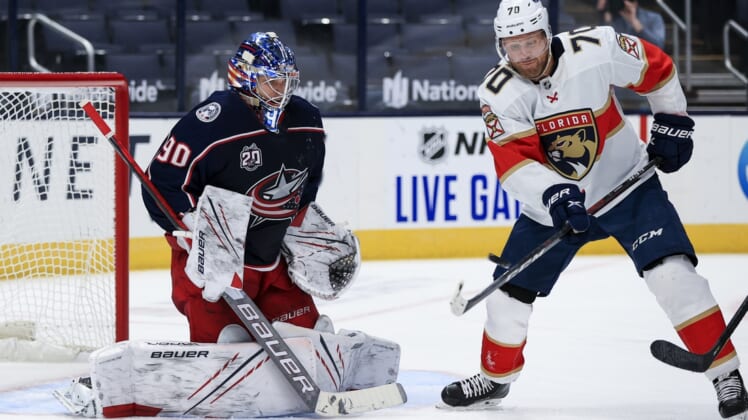 Alexandre Texier scored the shootout’s only goal on a brilliant, one-handed shot in the fourth round to lead the Columbus Blue Jackets to a 3-2 win and hand the visiting Florida Panthers their first defeat on Thursday.

Merzlikins also denied Anthony Duclair, Jonathan Huberdeau and Frank Vatrano to improve to 2-1-1 with the win.

Mikko Koivu scored his first goal for Columbus, Domi tallied on the power play and Merzlikins stopped 33 of 35 shots for the Blue Jackets, who earned points for the sixth straight game (3-0-3).

A native of Columbus, Jack Roslovic made his debut by centering the third line for his hometown club after being traded from Winnipeg to the Blue Jackets Saturday along with Patrik Laine for center Pierre-Luc Dubois.

Florida’s Carter Verhaeghe and Eetu Loustarinen scored goals, Duclair produced his team-leading fifth assist and Driedger made 29 saves on 31 shots.
Defenseman Markus Nutivaara, who played the past four seasons for Columbus, had an assist in his Florida debut, while right wing Brett Connolly played in his 500th NHL game.

On Tuesday in the teams’ first meeting, the Blue Jackets led early and late, gave up the game-tying goal with three seconds remaining and lost 4-3 in a five-round shootout on Hornqvist’s game winner.

After winning a board battle in the defensive end, Koivu was rewarded when he received a pass from Eric Robinson, who circled behind Driedger’s net and fed a pass from the right side through the blue paint.

Trailing down the left side, Koivu — acquired in the offseason after playing 15 seasons for the Minnesota Wild — drilled the game’s first marker at 17:03.

Also a former member of the Blue Jackets, Duclair intercepted Texier’s outlet pass late in the second, put a shot on Merzlikins and Verhaeghe scored on the putback to tie it at 1 at 17:14.

Domi scored his first on Columbus’ second power-play, firing home the go-ahead goal just five seconds into the man advantage at 6:19 of the third after he won the faceoff and took a pass from Zach Werenski.

But Loustarinen tied it at 2 when he scored for the second time this season on a rebound at 12:56.