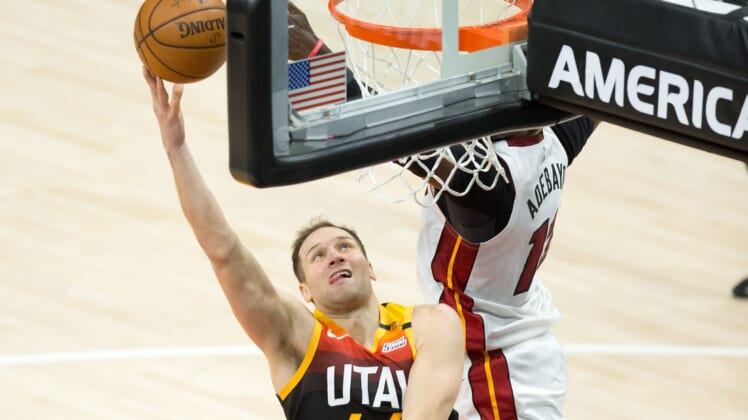 Mitchell scored eight points in a decisive third quarter as Utah turned a five-point halftime lead into a 21-point advantage. The Jazz outscored the Heat 31-15 in that period.

Kendrick Nunn topped Miami with 23 points, while Jimmy Butler and Max Strus each had 15 points as the Heat had their four-game winning streak snapped on the second stop of their seven-game Western Conference swing.

Gobert hit 6-of-7 shots, but Mitchell struggled from beyond the arc, going 3-for-12, but made 6 of 9 from two-point range.

Utah picked up its 18th win in 19 games and improved to 12-2 at home despite only hitting 12 of 46 treys and shooting 45.9 percent overall. The Jazz’s defense played a key role, limiting Miami to 40.7 percent shooting.

Miami controlled the first quarter and had a 36-31 lead after a 3-pointer by Strus in the second quarter when the Jazz turned it on.

A night after four Jazz players scored at least 25 points in a win over Milwaukee, Utah again got contributions from several sources.

Niang began a game-changing 14-0 run with a 3-pointer. Five other Jazz players scored in that surge, including Bogdanovic, Royce O’Neale, Clarkson, Joe Ingles and Gobert.

Ingles scored only eight points and added six assists after his 27-point game on Friday night, but his sixth and final assist of the game put him in a tie with Pete Maravich for seventh on the Jazz’s all-time assists list with 1,844.