RECAP: Baltimore Ravens need overtime to get past Minnesota Vikings 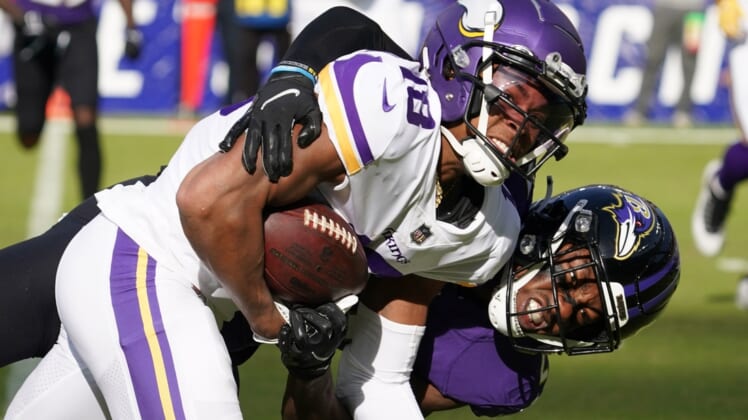 Justin Tucker kicked a 36-yard field goal with 16 seconds remaining in overtime and the Baltimore Ravens defeated the visiting Minnesota Vikings 34-31 on Sunday.

Devonte Freeman helped set up the game-winner with a 19-yard run to the Vikings 39 and Le’Veon Bell later ran 12 yards to the 19.

Anthony Barr deflected and intercepted Lamar Jackson‘s pass at the Minnesota 38 on the opening drive of overtime, but the Vikings (3-5) went three and out, gaining just one yard.

Jackson passed for 266 yards, three touchdowns and two interceptions for the Ravens (6-2) and ran for 120 yards on 21 carries. It was Jackson’s 10th 100-yard rushing game, tying the NFL record set by Michael Vick.

Kirk Cousins completed 17-of-28 passes for 187 yards and two touchdowns for the Vikings, while Dalvin Cook ran for 110 yards on 17 carries.

Bell’s 1-yard touchdown run with 3:31 remaining gave the Ravens a 31-24 lead, but the Vikings drove 75 yards in 2:26 and Cousins hit Adam Thielen on a one-yard fade pass to tie it with just over a minute remaining.

Trailing 3-0 in the first quarter, the Vikings had third-and-7 at midfield when Cousins found Justin Jefferson behind the defense for a 50-yard touchdown pass.

Minnesota started their next possession on their 6, with Cook breaking free for a 66-yard run – his longest of the season – to the Baltimore 19. After a pass interference in the end zone on fourth down gave the Vikings a new set downs, Cousins scored to cap Minnesota’s longest drive of the season, a 94-yarder.

The Ravens trailed 17-3 when they took over with inside 1:30 left in the first half, but a 42-yard pass interference penalty got them to the Vikings 5-yard line and Jackson hit Freeman for the touchdown with 22 seconds remaining.

Minnesota’s Kene Nwangwu fielded the second half kick-off at his 2-yard-line, cut to the right sideline and raced to the end zone, giving the Vikings a 24-10 lead.

Jackson and the Ravens then drove 72 yards. On fourth-and-2 at the Ravens 36, Freeman ran 8 yards and a penalty tacked on 15 more. Six plays later, Jackson passed 1 yard to fullback Patrick Ricard and Baltimore was within 24-17.

Baltimore tied it 24-all with an 18-play, 82-yard drive then spanned 10 minutes and ended with Devin Duvernay’s one-handed grab for a 5-yard touchdown with 9:19 remaining.