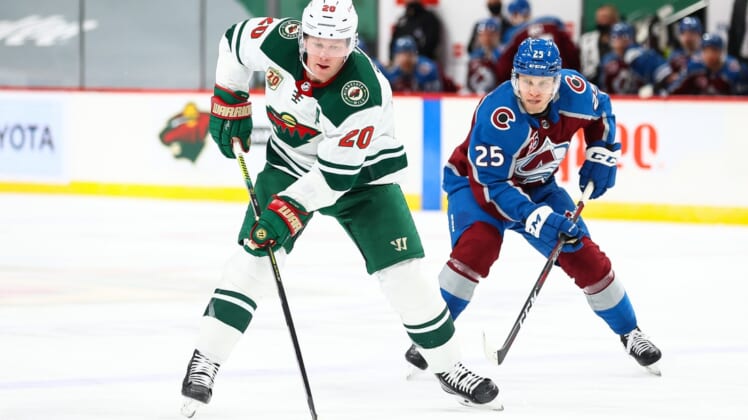 Brandon Saad and Mikko Rantanen had a goal and an assist apiece and the Colorado Avalanche beat the Minnesota Wild 5-1 in St. Paul, Minn., on Saturday night.

Nathan MacKinnon, Samuel Girard and Andre Burakovsky had two assists each and Philipp Grubauer had 19 saves for the short-handed Avalanche, who won the first of four games in six days between the teams.

Matt Dumba scored and Kaapo Kahkonen stopped 28 shots for the Wild. Dumba left the game in the third period with a right leg injury and didn’t return.

The Avalanche played most of the game with just five defensemen after Erik Johnson absorbed a hit into the boards from Jordan Greenway and then landed awkwardly on his shoulders and head midway through the first period.

Colorado was already playing without defenseman Devon Toews (foot) and forward Pierre-Edouard Bellemare (lower left leg), both of whom were hurt in Thursday’s game against San Jose.

The Wild were without forward Kevin Fiala after he was suspended for three games by the league for his hit on the Los Angeles Kings’ Matt Roy on Thursday night.

O’Connor gave the Avalanche a 1-0 lead when his shot from the point went off Kahkonen’s dropped stick and in at 3:02 of the first. It was his first of the season.

Dumba tied it at 6:49 when his shot went off of Grubauer — his third of the season — but Donskoi made it 2-1 when he one-timed a centering pass from Saad through Kahkonen at 19:43 of the first. It was his fourth goal of the season.

Rantanen gave Colorado a two-goal cushion when his high shot from the left circle beat Kahkonen at 3:07 of the second period. It was his seventh of the season and seventh in the last eight games.

Saad gave the Avalanche a 4-1 lead with his fourth at 12:17 of the season and Compher scored his first of the season on the power play at 14:55.