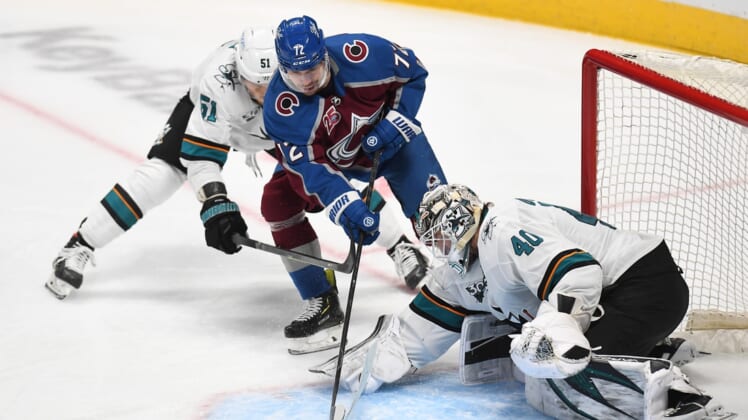 Philipp Grubauer had 21 saves, Nazem Kadri had two goals and an assist, and the host Colorado Avalanche beat the San Jose Sharks 3-0 in Denver on Thursday night.

Andre Burakovsky also had a goal and Brandon Saad added two assists for Colorado, which swept the two games against San Jose.

Colorado lost center Pierre-Edouard Bellemare to a left leg injury late in the first period and he did not return. Bellemare was hurt when San Jose’s Ryan Donato lost an edge in the neutral zone and slid into Bellemare, whose left leg buckled. He was helped off the ice and to the locker room.

The Avalanche are already without forward Matt Calvert, who has missed two games with an upper-body injury.

Colorado hit several posts through the first two periods and Dubnyk made a few key saves to keep the game scoreless. The Avalanche got two power plays at the end of the second period and nearly scored when Gabriel Landeskog skated in close and put a backhand on net. Dubnyk was able to cover up in the middle of a pile of players in front of the crease.

Colorado’s second power play spilled into the third period, and it resulted in four quality shots on goal and another post before the Sharks were able to kill it off.

The Avalanche finally broke through midway through the final 20 minutes. After Dubnyk stopped a couple of shots, the puck trickled out toward the right circle and Kadri tapped it in for his second of the season at 9:55.

Colorado added an insurance goal 1:58 later when Burakovsky came down the slot, took a pass from Kadri and tipped it over Dubnyk’s left shoulder for his third of the season.