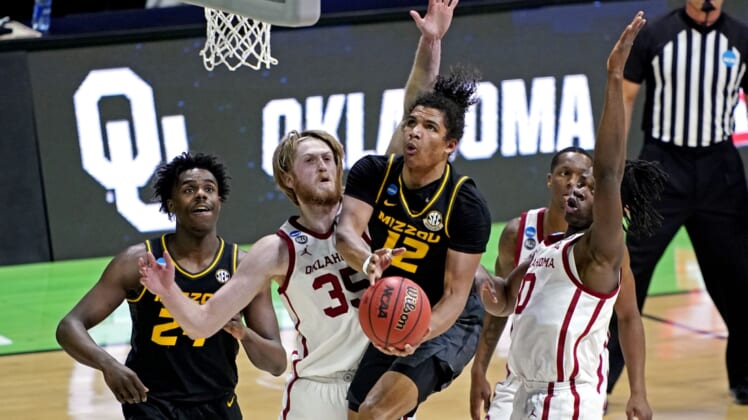 Austin Reaves scored 23 points to help eighth-seeded Oklahoma hold on for a 72-68 win over ninth-seeded Missouri in a first-round game in the West Region on Saturday.

The Sooners led by eight with a minute remaining, but Dru Smith made sure the Tigers wouldn’t go away quietly. Smith hit a pair of 3-pointers in a 10-second span to cut the Oklahoma lead to three.

Reaves’ turnover in the closing seconds gave the Tigers a chance to tie with a 3-pointer, but Smith couldn’t find an open shot on the perimeter so he fed inside, where Drew Buggs was fouled. Buggs made his first free throw but missed the second intentionally. Jalen Hill grabbed the rebound, then made a pair of free throws after being fouled quickly.

After missing six first-half 3-pointers, the Sooners were 4 of 6 from behind the arc after halftime.

Missouri built a seven-point lead quickly, making six of their first seven shots, including a pair of 3-pointers from Mark Smith, who came into the game having missed 11 consecutive from beyond the arc. He made all three of the 3-pointers he attempted in the first half.

But then the Sooners got going thanks to Reaves and Manek, who combined for an 8-0 run to put Oklahoma ahead for the first time.

The teams went back and forth for the rest of the first half, with the Tigers taking a 27-26 lead into the break.

Missouri didn’t attempt a free throw in the first half as the Sooners were called for just five first-half fouls.

The Tigers thrived in transition early, with 10 fastbreak points in the first half.

During their late-season struggles, Oklahoma was often sluggish starting the second half. But against the Tigers, the Sooners reeled off a 12-2 run coming out of the break, with eight of those points from Manek.

The Sooners were without starting guard De’Vion Harmon, who tested positive for COVID-19 earlier in the week. Hill started in Harmon’s place.