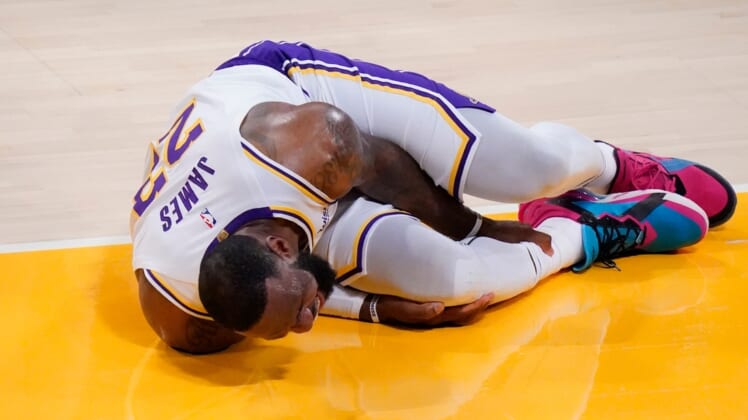 The Atlanta Hawks earned their eighth win in a row, a 99-94 road victory over the Los Angeles Lakers.

However, the story of the day was an injury to Lakers’ superstar LeBron James.

With 10:50 left in the second quarter, Atlanta Hawks forward Solomon Hill rolled into James’ right ankle while chasing after a loose ball. James let out a scream in frustration as he grimaced in pain rolling around on the floor.

James was attended to by the team’s training staff. However, he got up on his own and stayed in the game, draining a three. On the ensuing possession, James called a timeout and left the floor headed for the locker room for further evaluation, knocking down a chair on the way.

Fellow co-captain Anthony Davis went back to the locker room to check on him.

Now in his 16th season, the 36-year-old James has missed just one game this season due to a lingering, mild left ankle sprain.

The Lakers announced James suffered a right ankle injury, and he did not return to the game.

With the made three-pointer just before leaving the game, James continued his streak of 1,036 straight games in double digits, but that milestone was the least of the Lakers’ concerns after the game.

Los Angeles already has two starters on the bench with Davis out due to a right calf strain and Marc Gasol working himself back into game shape after missing six games due to the NBA’s healthy and safety protocols. So, playing without James for a significant chunk of games could be a daunting task for the undermanned Lakers.

Meanwhile, Atlanta’s leading scorer Trae Young had trouble finding easy buckets but did a great job running his team, finishing with 14 points and 11 assists. John Collins paced the Hawks with 27 points and 16 rebounds. Danilo Gallinari chipped in 18, including 4-of-6 shooting from the 3-point line. Clint Capela added eight points and 16 boards.

Montrez Harrell led the Lakers with 23 points and 11 rebounds.

The Lakers held a one-point lead at halftime, but the Hawks used a 12-0 run to start the second half to take control of the game, leading by as many as 14 in the second half.

Saturday’s game marked the return of guard Rajon Rondo to Los Angeles to play against his former team since the Lakers won the NBA championship in the Orlando bubble last year.

Rondo finished with two points and five assists in 14 minutes.

“He’s such a unique player,” Lakers coach Frank Vogel said about Rondo. “His mind is unlike any player that I’ve ever coached, and that the league has probably seen. He just has a unique lens on the game. And I think that is something you cannot replace.”

The win over the Lakers was the start of an eight-game road trip out West for the Hawks.

The Hawks have been on the uptick since the firing of head coach Lloyd Pierce on March 1, replacing him with assistant head coach Nate McMillan. Atlanta is 8-0 with McMillan at the helm.