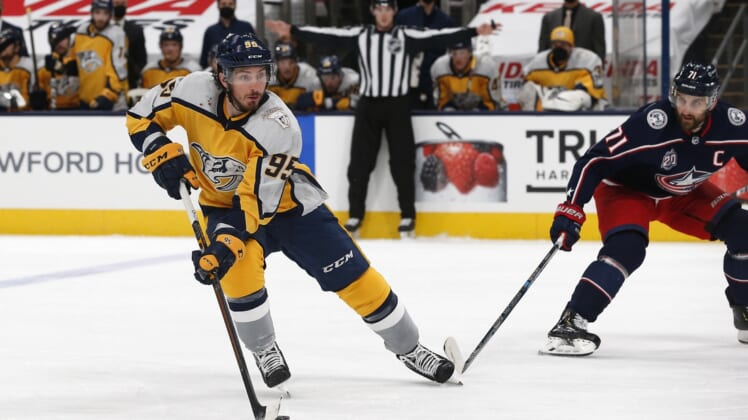 Cam Atkinson scored a goal in his fifth straight game and Elvis Merzlikins made 32 saves to fuel the host Columbus Blue Jackets to a 3-0 victory over the Nashville Predators on Thursday.

Max Domi also tallied and Eric Robinson added an empty-net goal for the Blue Jackets, who snapped a modest two-game winless skid (0-1-1) and defeated Nashville for the first time in three tries this season.

The modest offense was more than enough for Merzlikins, who made the most of his first start since Jan. 31. He preserved his first shutout of the season and sixth career by stopping all 13 shots he faced in the third period.

Juuse Saros finished with 19 saves for the Predators, who have dropped five of their last six games overall and fell to 1-6-0 away from Music City this season. Nashville returned to the ice after having a pair of contests against the Stars postponed due to power outages and severe weather in the Dallas area.

Atkinson, the NHL’s First Star of the Week, benefited from a fortunate bounce to open the scoring with 17 seconds remaining in the first period.

Atkinson’s shot from the right circle caromed off sliding defenseman Matt Benning, however the puck floated skyward and landed behind Saros for his team-leading seventh goal of the season. Atkinson’s goal streak is the second longest of his career, trailing only a stretch of seven straight games during the 2018-19 season.

Columbus doubled the advantage at 4:55 of the second period.

Riley Nash won an offensive zone faceoff and defenseman Seth Jones set up Domi, who unleashed a blast from along the right-wing boards that sailed close to linesman Ryan Galloway and past Saros. The goal was allowed to stand after video review confirmed the puck did not hit the linesman on its way to the net.

The goal was the third of the season for Domi, while the assist boosted Jones’ point total to eight (one goal, seven assists) in his last eight games.

Robinson scored into an empty net with 2:31 remaining in the third period.