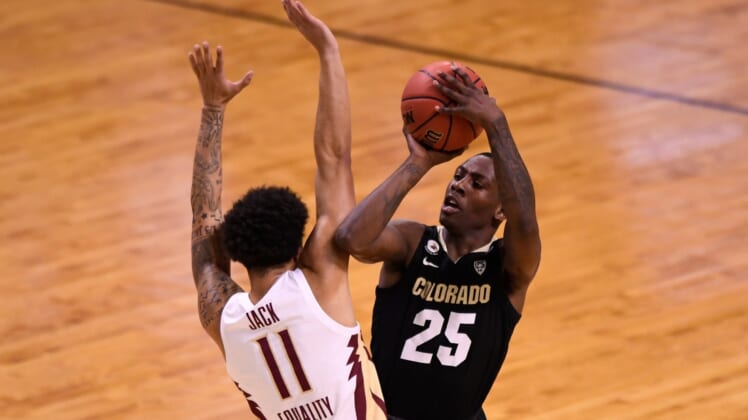 Anthony Polite scored a career-high 22 points, Malik Osborne added 11 off the bench and fourth-seeded Florida State beat fifth-seeded Colorado 71-53 in the second round of the East Region of the NCAA Tournament in Indianapolis on Monday night.

D’Shawn Schwartz scored 13 points, Evan Battey had 11 and McKinley Wright IV 10 for the Buffaloes (23-9). Colorado was the first Pac-12 Conference team to lose in the NCAA Tournament this year.

Florida State opened up a 28-20 lead early in the second half before the Buffaloes made a run to get close while Wright was on the bench with three fouls.

Keeshawn Barthelemy hit a 3-pointer, the Seminoles missed two jumpers on the other end and Schwartz made another from behind the arc to cut the deficit to 36-35 with 11:54 left.

After a timeout, Scottie Barnes found Sardaar Calhoun for an alley-oop, and then Barnes hit a jumper and Raiquan Gray made two free throws to put the Seminoles ahead 44-36. Wright hit two free throws on the other end, but Balsa Koprivica converted a three-point play to extend the advantage.

The teams traded 3-pointers to keep it a nine-point game, but a foul on Jeriah Horne and a technical on Colorado put Florida State up 11. The Buffaloes had a backcourt violation, and Polite hit a 3-pointer to make it 55-41 with 6:03 left.

Colorado was only able to get within 13 before the Seminoles closed it out at the foul line.

Both teams struggled offensively in the first half. Colorado had 11 turnovers, made just nine field goals and went just 2-for-9 from deep after hitting 16 3-pointers in Saturday’s first-round win.

Florida State wasn’t much better, turning it over nine times and making only nine shots from the field. The Seminoles held the Buffaloes without a point for more than six minutes in the first half. Despite that, Colorado trailed just 24-20 at halftime.