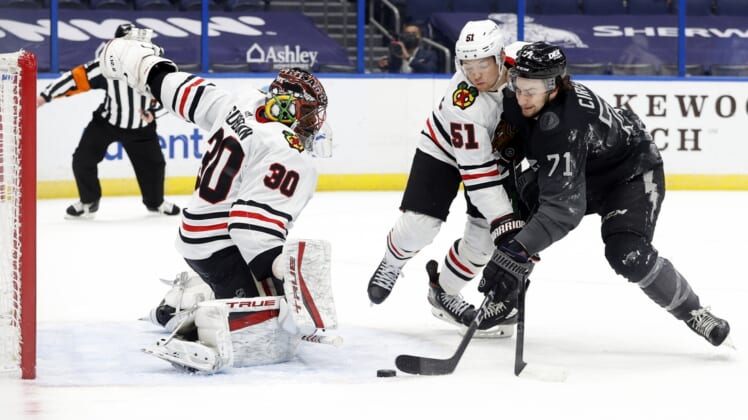 Andrei Vasilevskiy made 30 saves to record his franchise high-tying 11th straight win in the Tampa Bay Lightning’s 4-1 victory over the visiting Chicago Blackhawks on Saturday afternoon.

The 11th consecutive victory by Vasilevskiy tied him with former teammate Louis Domingue for the franchise record set two seasons ago. The Lightning’s 22nd win put them one better than the Vegas Golden Knights for the league lead.

Vasilevskiy, who made a pair of strong breakaway saves on Carl Soderberg and Patrick Kane, allowed only Alex DeBrincat’s third-period goal. He improved to 10-0-0 in his career against the Blackhawks.

The Lightning upped their home record to 12-2-0 and improved to 6-0-1 versus Chicago this season.

Tampa Bay received a power-play goal and an assist from captain Steven Stamkos, along with a goal from Brayden Point, Anthony Cirelli and Yanni Gourde.

Defenseman Mikhail Sergachev recorded his 100th career assist on Cirelli’s goal at 1:53 of the second period.

Malcolm Subban stopped 25 of 29 shots as Chicago went 0-for-4 on the power play and fell to 1-5-1 against the Lightning.

The Lightning broke the ice after a failed clearing attempt by Chicago in the first period. Stamkos dished a pass out to Killorn, and Point took the ensuing pass in close on Subban and beat him for his 12th goal at 6:21.

Cirelli got behind Chicago defenseman Duncan Keith early in the second period, took a flip pass from Sergachev and went forehand-to-backhand for his ninth goal.

On a five-on-three man advantage, the Lightning killed off all 83 seconds then finished the remainder of the five-on-four power play as Vasilevskiy stood tall in the crease.

Gourde used a great individual effort on his own rebound to score his 10th goal of the season. It was his fifth goal and ninth point in seven games against Chicago this season.

In the third, Dominik Kubalik had the primary assist in his 100th NHL game on DeBrincat’s goal from the slot at 4:50 to break the shutout bid. Philipp Kurashev also recorded an assist, but Chicago lost for the sixth time in seven games (1-6-0).