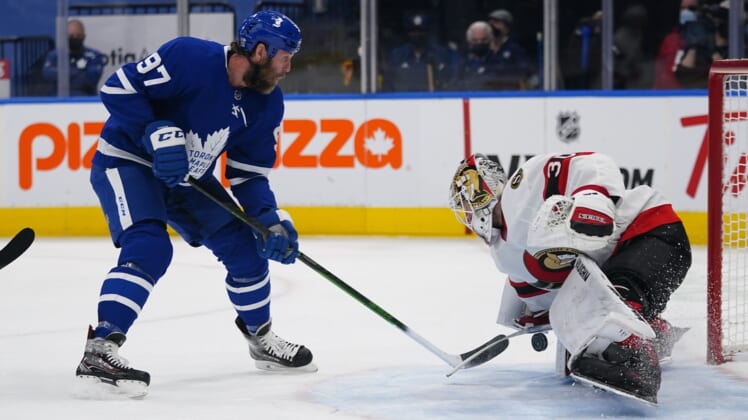 Alexander Kerfoot scored in the third period to snap a tie and the Toronto Maple Leafs defeated the visiting Ottawa Senators 2-1 on Wednesday night.

The teams have split the first two games of a three-game series. Ottawa won the series opener on Monday 6-5 in overtime after overcoming a four-goal deficit.

Brady Tkachuk scored for the Senators.

Frederik Andersen made 27 saves for Toronto while Matt Murray made 26 saves for Ottawa.

Ottawa had a 10-5 advantage in shots on goal in a scoreless first period.

Murray, who had missed the previous two games with an upper-body injury, thwarted a dangerous backhand attempt by John Tavares at 17:39 of the first period. Less than a minute later, Connor Brown failed to beat Andersen on a three-on-one break out by Ottawa.

Toronto’s Joe Thornton shoved Murray’s pad into the net and it took the puck over the goal line at 19:57 of the first but it was ruled no goal.

Matthews scored for Toronto at 4:41 of the second period, seconds after Thornton was denied a goal because he deflected the puck into the net with a high stick. Justin Holl froze Murray as he hesitated in the high slot before passing to Matthews, whose slap shot went in off the post and into the net for his 14th goal of the season. He has at least one point in each of his past 14 games.

Murray stopped a shot by Pierre Engvall, who was alone in front of the goal, at 13:46 of the second.

Tkachuk tied the game at 18:51 of the second period with his fifth goal this season, knocking in a pass to the goalmouth from Chris Tierney.

Ottawa led 22-18 in shots on goal after two periods.

Kerfoot notched his third goal of the season at 10:46 of the third, controlling the rebound off Muzzin’s shot and putting in a wrist shot off the sprawling Murray and the left post.