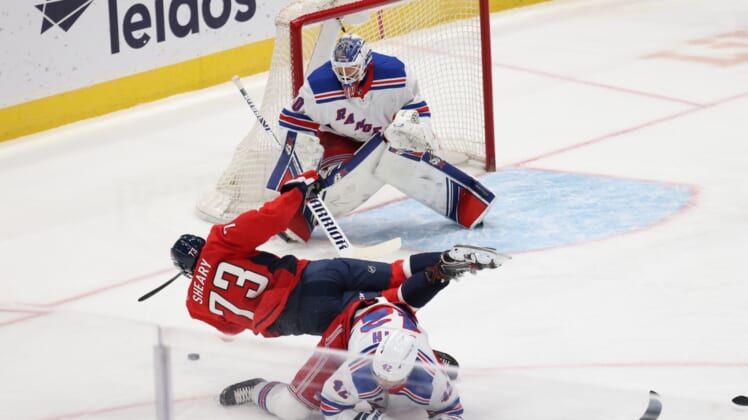 Alex Ovechkin scored twice late in the third period as the Washington Capitals rallied for a 2-1 victory over the visiting New York Rangers Friday night.

The victory extended Washington’s winning streak to seven games — all of which have come without Tom Wilson, who had been suspended and should be eligible to come back for the next game.

The Rangers held a 1-0 lead for nearly two periods before Ovechkin took over. He scored twice in just over three minutes to give the Capitals a hard-earned victory.

New York had to play without coach David Quinn — and assistants Jacques Martin, David Oliver and Greg Brown — for a second straight game as they all are on the COVID protocol list. They are expected to miss Saturday’s game in Washington also.

The Rangers were coming off a 9-0 victory versus Philadelphia and came up with several scoring chances in this contest, outshooting the Caps 33-18.

Goalie Alexandar Georgiev had struggled recently but played well for a second straight game. Georgiev posted a 26-save effort in the Flyers’ game and wasn’t tested as much in this contest, but still finished with 16 saves.

Washington goalie Vitek Vanecek continued his strong rookie season with 32 saves and kept his team in the game until the third-period rally. The Rangers tested him several times, and Vanecek kept coming through.

Still, New York took a 1-0 lead 16:42 into the game when Artemi Panarin beat Vanecek on a shot from the left circle. The Rangers held that lead Alex Ovechkin came through in the third period.

Ovechkin worked his way through traffic and poked a rebound past Georgiev with 6:42 left in the third period, tying the game at one. Then, with 3:33 remaining, the Washington captain did it again, flipping a backhand rebound of a John Carlson shot into the net from nearly the same spot as the first goal.