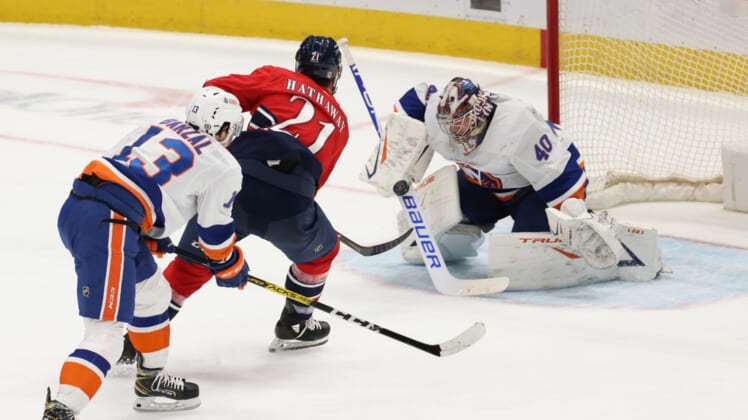 Alex Ovechkin hit two more milestones Tuesday night, when the star left winger assisted on the Capitals’ first goal and scored the second one in Washington’s 3-1 win over the visiting New York Islanders.

The goal was the 718th of Ovechkin’s career, breaking a tie with Phil Esposito for sixth on the all-time list. Ovechkin is 13 goals behind fifth-place Marcel Dionne.

Ovechkin’s assist gave him 1,300 career points, and the goal gave him sole possession of 34th place on the all-time points list, one point ahead of Jarome Iginla.

T.J. Oshie scored in the second period and Nicklas Backstrom scored on the power play in the opening seconds of the third as Washington won its sixth straight. The Capitals moved into a tie for first place in the East Division with the Islanders, who had their nine-game winning streak snapped.

Oliver Wahlstrom scored in the third period for the Islanders, who also had their 12-game point streak snapped. Goalie Semyon Varlamov recorded 19 saves.

Ovechkin was credited with the second assist when Oshie scored the game’s first goal at 10:36 of the second period. Evgeny Kuznetsov took a pass from Ovechkin, deked as if he were going to shoot and got past Varlamov before firing a shot into the open net. The shot bounced off the post and into the crease, where Oshie swooped in for the easy put-back.

Ovechkin broke the tie with Esposito just under five minutes later, when he went to one knee while firing a shot from the left faceoff circle that sailed over Varlamov’s shoulder for a power-play goal with 4:36 remaining in the middle period.

Ovechkin got up, pumped his fist and went back down to one knee before being embraced by teammates.

A penalty on the Islanders’ Scott Mayfield, who was whistled for roughing after a skirmish with the Capitals’ Richard Panik after the second-period horn, set up Washington’s third goal. Backstrom dashed to the net, took a pass from Jakub Vrana and tipped the puck beyond Varlamov’s pads just 28 seconds into the third.

The Islanders scored on the power play fewer than four minutes later. A pass from Washington’s Zdeno Chara glanced off Panik’s skate to Wahlstrom, whose shot ticked off Panik’s stick and into the net for the unassisted goal at 4:17.