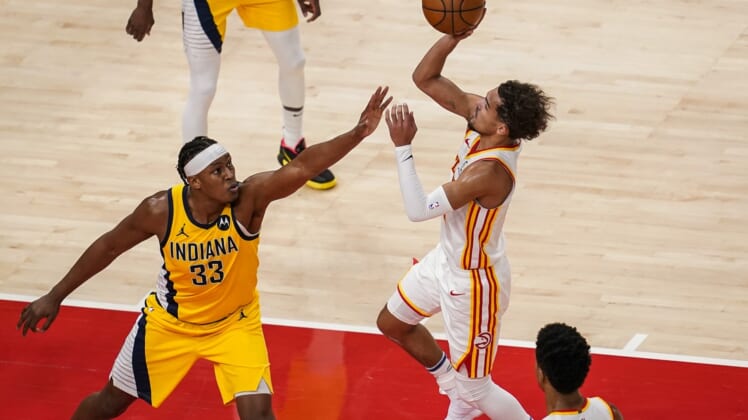 Aaron Holiday came off the bench to score a season-high 18 points and help the visiting Indiana Pacers erase a nine-point, fourth-quarter deficit to defeat the Atlanta Hawks 125-113 on Saturday.

Holiday was the catalyst of a 31-9 run, scoring 11 of his 16 second-half points in the final 7:23. Holiday, who finished 7-for-11 from the floor, put the team ahead for the first time in the fourth quarter when he followed his own a 3-pointer with a driving layup. He later added two more baskets after Atlanta tied the game for the final time at 105-105.

The Pacers won their second straight game while the Hawks lost for the six times in the past seven contests.

The Hawks have won only nine of 16 games in which they led after three quarters. It was the third time they dropped both ends of a back-to-back.

Clint Capela had 24 points and 10 rebounds for Atlanta, and Danilo Gallinari came off the bench to score 20. John Collins and Cam Reddish each scored 18.

Trae Young had 15 points and 14 assists and played through an injury to his right thumb that required trainers to tape it up at halftime.

Indiana opened up a 10-point lead on a basket by JaKarr Sampson at 6:35 in the second quarter, but Atlanta got back to within a point on a bucket by Capela that capped a 14-5 run with 3:12 remaining. The Pacers led 62-58 at halftime.

The Hawks led by as many as eight thanks to 13-4 run midway in the third quarter and led 87-84 lead entering the final quarter.

Both teams play again on Monday. The Pacers return home to play the Chicago Bulls while the Hawks play at the New York Knicks.