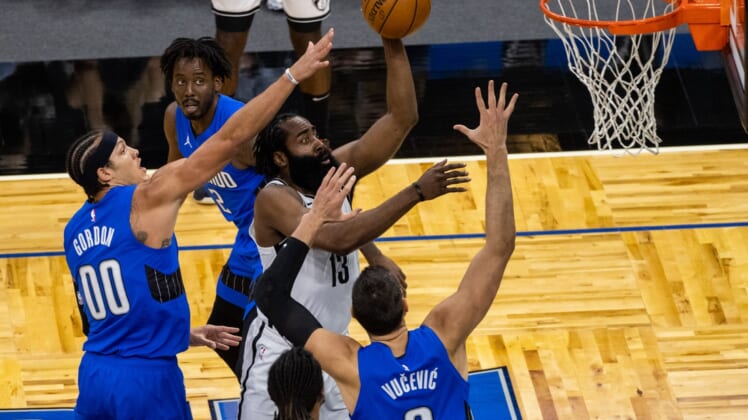 Aaron Gordon scored a season-high 38 points and the host Orlando Magic broke a nine-game losing streak with a 121-113 victory over the Brooklyn Nets on Friday night.

Orlando won its first game since beating Detroit on Feb. 21. The Magic led most of the way Friday and seized control in the third quarter, then withstood a Brooklyn comeback attempt in the fourth.

Gordon finished three shy of his career high by shooting 14 of 20 from the field and hitting 7 of 8 on 3-pointers as the Magic halted their longest skid since December 2017.

Evan Fournier added a season-high 31 points just one night after committing a costly turnover in the final seconds of the Magic’s 94-93 loss to the host New York Knicks.

Kyrie Irving returned after missing Wednesday’s game with a sore groin and scored a season-high 43 points for the Nets, who shot 47.3 percent and made only 10 of 37 from long range. James Harden added 19 and nine assists but shot 4 of 15 from the field.

Orlando shot 57.1 percent, hit seven 3-pointers and took a 35-29 lead after the opening quarter. After taking a 12-point lead midway through the second, Orlando settled for a 64-62 halftime lead after Irving scored Brooklyn’s final 11 points.

The Nets briefly took a one-point lead on the first possession of the third but Orlando seized control with a 14-4 run that made it 95-78 with 2:51 on Vucevic’s 13-footer.

Orlando then held a 103-84 lead entering the fourth after Dwayne Bacon hit a 3-pointer with one second left.

The Magic missed their first eight shots of the fourth until Vucevic hit a hook shot with 5:37 left to make it 108-100, and Orlando finally clinched it when Gordon hit a 3-pointer with 1:39 remaining.