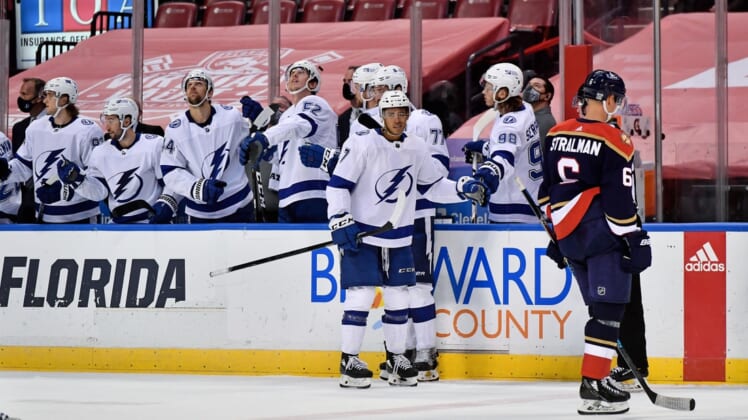 Tyler Johnson scored twice, Andrei Vasilevskiy made 33 saves and the Tampa Bay Lightning cruised to a 6-1 win over the Florida Panthers on Saturday night at Sunrise, Fla.

The Lightning’s Mathieu Joseph and Ondrej Palat each had a goal and an assist, and Alexander Volkov and Barclay Goodrow also found the net for the visitors. It was the first NHL goal for Volkov, 23.

Tampa Bay scored four goals in the second period to break open a scoreless tie. Prior to Saturday, the Panthers had allowed just seven second-period goals all season.

The teams have split the first two games of the series, both in Sunrise. The finale of the three-game set between in-state opponents is scheduled for Monday night in Tampa.

Vasilevskiy improved to 9-2-1, tying Toronto’s Frederik Andersen for the NHL lead in wins.

Florida’s Sergei Bobrovsky made 22 saves but lost in regulation for the first time this season (5-1-1). Frank Vatrano got the Panthers’ only goal.

One bit of good news for the Panthers was the return of forward Anthony Duclair, who missed one game due to COVID-19 protocol.

The Lightning won despite the absence of forwards Steven Stamkos (lower-body injury) and Anthony Cirelli (shoulder).

Fortunately for the Lightning, the Panthers went 0-for-4 on their power play for the night, failing to capitalize on a double-minor high-sticking penalty on Tampa Bay’s Victor Hedman in the first period.

Tampa Bay finally cracked the scoreboard with 4:11 gone in the second. Palat’s low shot from the right circle on a power play beat Bobrovsky through the five hole. That power play was set up by a Brayden Point breakaway that was broken up by a Markus Nutivaara slash, which was penalized.

The Lightning made it 2-0 just 81 seconds later as Joseph blocked a long shot attempt by Duclair. Joseph was off to the races, scoring on a backhand move, slipping the puck between Bobrovsky’s pads.

Tampa Bay made it 3-0 when Gemel Smith won a board battle with Florida’s Carter Verhaeghe and Aleksander Barkov. Smith then fed Johnson, who scored from the low slot.

The Lightning barrage ended with 12 seconds remaining in the second as Johnson pounced on a rebound, shoveling the puck in with his backhand for a 4-0 advantage.

Florida finally scored with 10:13 left in the third as Brett Connolly, on a rush, passed back to Vatrano for the goal. But goals by Volkov and Goodrow put the game away for Tampa Bay.