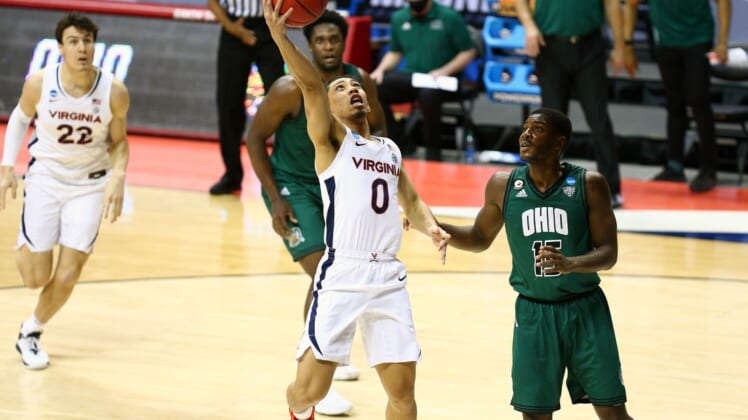 Jason Preston had 11 points, 13 rebounds and eight assists to lead No. 13 seed Ohio to a 62-58 upset of No. 4 Virginia on Saturday night in a West Region first-round NCAA Tournament game in Bloomington, Ind.

This is the second first-round exit in the last three NCAA tourneys for the Cavaliers, who became the first No. 1 seed ever to lose to a No. 16 seed in 2018 before capturing their first national championship in 2019.

The Cavaliers matched their largest lead at 38-31 on Kihei Clark’s layup with 14:36 to play.

The Bobcats responded with an 16-2 run to seize their first lead since it was 3-0. Vander Plas scored the last eight points of the surge to put Ohio up 47-40 with 4:43 remaining.

Virginia fought back, cutting the Bobcats’ lead to 51-49. Roderick answered with a layup and a 3-pointer to push Ohio’s advantage back to 56-49.

Murphy then drilled his fourth 3-pointer of the game with eight seconds left to get within 60-58, but Lunden McDay canned two free throws for the final margin.

A 3-pointer by Murphy with 3:57 left gave the Cavaliers the largest lead by either team in the half at 24-17. The Bobcats closed with a 10-4 run, capped by Vander Plas rattling home a straightaway 3-pointer with three seconds left.