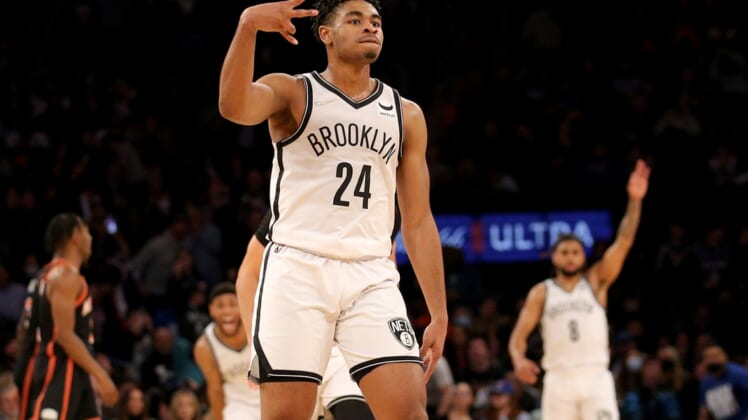 Two games represent a small sample, but it appears following a lengthy losing streak, the Brooklyn Nets are regaining their footing following a pair of drastically different wins.

After matching the largest comeback in franchise history, the Nets attempt to reach the All-Star break with three straight wins Thursday night when they host the Washington Wizards.

Brooklyn lost 11 in a row from Jan. 23-Feb. 12 in a skid that saw them lose seven double-digit games as James Harden sought a trade. The final game of the skid was two days after the Nets traded Harden as they nearly erased a 21-point deficit in Miami.

The Nets halted the skid with Monday’s 109-85 wire-to-wire rout of the Sacramento Kings, and afterward Bruce Brown cited a “different vibe” in the locker room without saying Harden’s name. Two days later, the Nets erased a 28-point deficit and pulled off an impressive 111-106 win over the New York Knicks at Madison Square Garden, putting them in position for three straight wins for the first time since getting four straight wins Dec. 10-16.

Rookie Cam Thomas scored 16 of his 21 points in Brooklyn’s 38-point fourth quarter while Seth Curry added 20 in a game that matched Brooklyn’s comeback in Sacramento on March 19, 2019 and was part of a second straight strong second half.

In the past two wins, the Nets have outscored Sacramento and New York 121-78 in the second half and 67-38 in the fourth quarter.

“It can (carry over) but it’s about continuing to have that same character, that same principles, those same values where they’re coming together, not going apart,” Nets coach Steve Nash said. “They’re finding solutions, they’re trusting in us (coaches) and we’re showing a deep trust and belief in them. Things are getting better. We’re growing, I think, a resolve that’s really important down the road.”

After getting a 103-94 win over the Detroit Pistons on Monday, the Wizards were handed a 113-108 loss by the Indiana Pacers on Wednesday night in a game when they were within two points twice in the final 90 seconds.

“You never want to come up short, but you always want to fight and give yourselves a chance,” Washington coach Wes Unseld Jr. said. “We didn’t play great, but we played good enough to give ourselves a chance and stay in it.”

Kentavious Caldwell-Pope scored a season-high 27 points and tied a season-high with five 3-pointers as Washington hit 17 3-pointers to match its second-highest total of the season. Kyle Kuzma, who posted his first career triple-double in the last meeting against Brooklyn, added 26.

Washington played without Kristaps Porzingis, who has yet to make his debut due to a bruised right knee after being obtained from Dallas for former Net Spencer Dinwiddie and Davis Bertans. Porzingis has missed nine straight games since his last appearance on Jan. 29 and will sit out again Thursday.