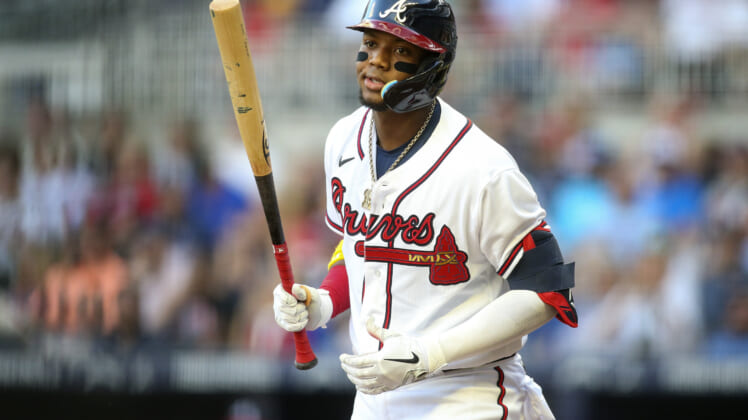 The post-Freddie Freeman era is off to a yawning start for the Atlanta Braves. They’re 14-17 on the young 2022 MLB season, underwhelming across the board and don’t look like the team that has won the National League East in each of the last four seasons.

All that said, the sky isn’t falling, here. The Braves are off to a mere slow start and all the answers are in the building.

Here are three reasons why the Braves will overcome their rough start.

Atlanta’s most surprising struggle to date has come on the offensive front. They’re struggling to get on base, inconsistently coming through in the clutch and have never looked worse as a collective whole. All that said, this unit is a safe bet to right the ship.

Freeman is arguably the best first baseman in the sport, but he alone didn’t spark the Braves’ offense. They also acquired a premier first baseman to replace Freeman in Matt Olson — albeit for three blue-chip prospects and four prospects in total.

Ozzie Albies is a smooth and productive hitter from both sides of the plate who’s coming off the best offensive season of his MLB career; Albies totaled 30 home runs and 106 RBIs last season. Dansby Swanson has continually improved at the plate and in the field, becoming one of the better shortstops in the sport.

Marcell Ozuna is an extra-base hit machine. Austin Riley is a considerable slugging threat. Olson is a formidable hitter from the left side. Adam Duvall has pop. Eddie Rosario, who’s currently on the injured list, can rake. Ronald Acuna Jr., perhaps the Braves’ best player at full force, recently made his return from a torn ACL. Meanwhile, catcher Travis d’Arnaud is off to a superb start, hitting a team-best .309.

Manager Brian Snitker has All-Star-caliber hitters and slick fielders in every part of his depth chart. This is one of the elite offensive cores in the sport. They will inevitably perform as such in the coming months.

2) Atlanta Braves have upside across the board

As previously alluded to, the Braves have an offense capable of better performance than what they’ve put forth thus far this season. That notion applies to their pitching staff, as well.

Atlanta won the 2021 World Series primarily due to a young, homegrown pitching staff making strides. It was unique. The majority of those arms remain on the active roster.

Max Fried has become an electric left-hander who induces weak contact with his array of off-speed stuff, pitching deep into games. Kyle Wright has experienced a recent resurgence as a starter, pitching efficiently and keeping the Braves in games. One could argue that Ian Anderson, 24, has been the Braves’ best postseason pitcher since 2020.

When active, Huascar Ynoa and Bryce Elder have had their moments in the starting rotation. Charlie Morton is still a stable and savvy right-hander who performs along the lines of a top-of-the-rotation starter. Out of the bullpen, the likes of A.J. Minter, Will Smith, Tyler Matzek and Jesse Chavez headline an efficient, high-octane bullpen. They’re now joined by Kenley Jansen.

There’s depth, upside and continually improving players in all facets of this roster. Most of them aren’t anywhere near their prime. The Braves have reason to believe that their entire team will play better as the season progresses.

No matter how one slices it, the Braves have the most proven nucleus in the NL East.

Now, Atlanta has a challenger for the NL East in the New York Mets, who have been a force to be reckoned with. New York is 21-10, which has them seven games up on the Braves for first place in the division. At the same time, the Mets blew a wide divisional lead last season and haven’t (yet) appeared in a playoff series with their current core. Outside of the Mets, there’s no team in the NL East that’s objectively in the Braves’ way.

Yes, the Philadelphia Phillies have a roster that should be competing in the playoffs. Time and time again, though, Philly has come up short, and they haven’t been able to start the engine this season. The Miami Marlins have a phenomenal pitching staff and an improved offense, but it’s likely not enough for them to be more than a mere .500 team. Meanwhile, the Washington Nationals are beginning an entrenched rebuild.

The Mets may very well be the best team in the NL East. They’re constructed to win in the immediate future, but so are the Braves. Even if New York runs away with the division, there’s plenty of wins for the taking in the NL East for the Braves. There’s also an extra playoff spot in both leagues.

It’s difficult to envision the Braves missing the MLB Playoffs altogether. Their slow start isn’t alarming and they reside in a divisional environment that allows them to buy time. Remember when the Braves were 52-55 and won the World Series?