The Atlanta Hawks had to be feeling good about themselves entering Friday’s Game 3 at home against the Philadelphia 76ers, but the visitors played like the East’s No. 1 seed and blew out the hosts 127-111 to take a 2-1 series lead.

With Game 4 looming on Monday, the Hawks do have some time to regroup and figure out how to even the score in this second-round showdown before they hit the road again. Should Trae Young and Atlanta feel optimistic, or resigned to an impending playoff exit?

Here are three reasons why Hawks fans shouldn’t lose hope despite how discouraging Game 3 appeared to be.

In the third quarter of Game 3, Joel Embiid grabbed his left knee after going up for a rebound and landing awkwardly, showing obvious discomfort as he continues to nurse a partially torn meniscus. It cast a slight shadow over his brilliant 27-point, nine-rebound, eight-assist performance.

Embiid missed 21 regular-season games, which continued the trend of health issues that have plagued his NBA career. The 27-year-old missed his first two seasons as a pro due to injuries, nearly retiring because of it. He’s putting more mileage on himself the more he plays this postseason.

It’s unfortunate, because Embiid is among the most electrifying talents and personalities in the modern NBA. His skill as a 7-footer on both ends of the court mind-boggling. You have to commend his toughness for battling through his latest physical ailment.

So with all that established, chances are, the longer this series goes on, the more likely it is that Embiid’s effectiveness will decline. Mind you, he has a tough heads-up matchup with Atlanta center Clint Capela to contend with every night.

Ben Simmons hasn’t proven he can be consistent

Let’s keep in mind that Ben Simmons still has his presumptive prime ahead of him. He’s only 24. There’s still time for him to address his obvious shortcomings, namely his inability to shoot free throws and jumpers.

But we’re talking about right now. Yes, Simmons was aggressive during Game 3 and was attacking the rim at will en route to 18 points. However, in the previous contest in Philadelphia, he attempted only three shots and was a virtual non-factor.

Simmons does take on lots of responsibility for guarding Young and anyone else Philly rotates him onto. His prowess on that end of the floor can’t be understated. The thing is, Simmons becomes detached and disinterested far too often for a player of his caliber.

The implication here is that for all of Simmons’ flashes of brilliance on Friday, he’s bound to flop in the heightened atmosphere of Game 4, which is an absolute must-win for the Hawks. They can’t afford to go back to Philadelphia down 3-1.

Regular-season rebound is a rallying point

To springboard off that last point above, think about where this Atlanta team is coming from. An in-season coaching change from Lloyd Pierce to Nate McMillan totally changed the Hawks’ fortunes. Following a 14-20 start, they rattled off eight straight wins to start the month of March and really didn’t look back.

What’s a little bit of adversity now? We’ve seen time and again how Embiid and Simmons have folded in the playoffs. All the pressure is on them to deliver.

Think about this, too: Doc Rivers presided over the Los Angeles Clippers’ second-round collapse in 2020, as they blew a 3-1 lead to the Denver Nuggets. Until Rivers proves those demons have been exorcised, he’ll be under the microscope as well. 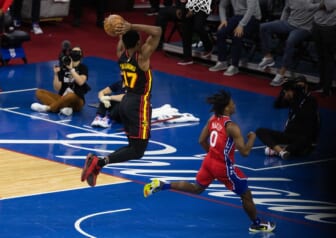 Many didn’t expect Atlanta to make it out of the first round against the New York Knicks, and the Hawks won that series with ease in five games. Young and Co. are playing with house money, which is a dangerous place for any opponent to be — even one of Philadelphia’s caliber.

Just saying: The Hawks may be down, but don’t count them out yet. A lot of extenuating circumstances are working in their favor. A win in Game 4 would put all the heat back on the 76ers to hold home court, and change the complexion of the series.