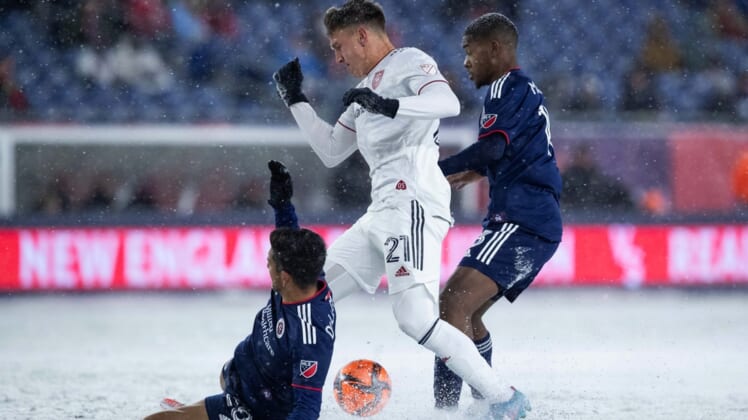 Tate Schmitt scored in second-half stoppage time to help visiting Real Salt Lake rally to a 3-2 win over the New England Revolution in snowy conditions on Saturday in Foxborough, Mass.

Justen Glad forged a tie in the 88th minute after converting Pablo Ruiz’s cross following a set piece before Schmitt scored from the left side of the box during the third minute of stoppage time.

New England’s Emmanuel Boateng scored in first-half stoppage time and Jozy Altidore tallied in the 62nd minute, two minutes after he entered the game as a substitute.

Adam Buksa notched a pair of assists and Edwards made three saves for the Revolution (1-1-1, 4 points).

Real Salt Lake midfielder Scott Caldwell logged 73 minutes in his return to Foxborough. The Massachusetts native spent his first nine seasons with the Revolution before being acquired by Real Salt Lake in January.

Boateng made the most of his first start of the season by opening the scoring during the third minute of first-half stoppage time.

Buksa deftly headed the ball through the box to Boateng, who sent a left-footed shot just inside the right post for his first goal of the season. Four of Boateng’s 12 career goals have come at the expense of Real Salt Lake.

Altidore didn’t take long to make his mark after joining reigning MLS MVP Carles Gil and Sebastian Lletget in entering the match as substitutes in the 60th minute. Lletget’s cross was headed across from Buksa to Altidore, who provided the proper finish from close range to give New England a 2-0 lead.

The goal was Altidore’s first of the season and 75th career.