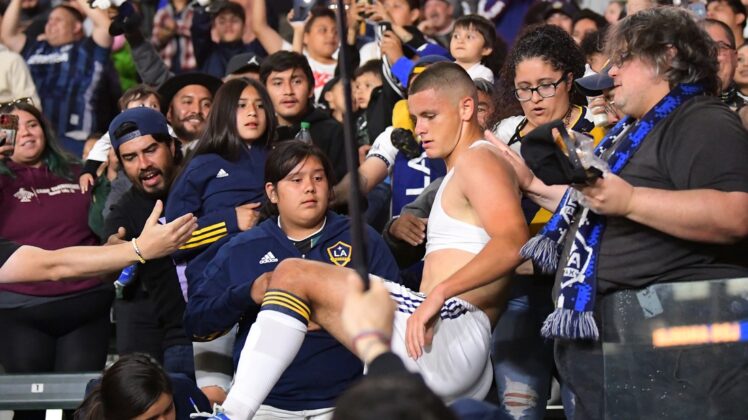 Real Salt Lake bolted out of the blocks to begin the season before being slowed considerably by a five-match winless skid.

They’ll face an uphill battle in their bid to regain their footing on Saturday when they host the Los Angeles Galaxy in Sandy, Utah.

Dejan Joveljic provided the fireworks after scoring in the 86th minute before celebrating in grand style. The 22-year-old Serbian raced to the corner flag, ripped off his shirt and jumped into the arms of the fans.

“The best feeling in the world is when you score,” Joveljic said. “That’s something that you cannot describe. You just need to feel it.”

Javier “Chicharito” Hernandez knows a thing or two about that. He has scored a team-leading five goals this season and 22 in his last 29 matches for the Galaxy, including one in a 2-1 loss to Real Salt Lake on Sept. 29.

Unfortunately for Real Salt Lake (3-2-4, 13 points), they have been unable to add to their goal total following back-to-back shutouts. Real Salt Lake were on the business end of a 6-0 shellacking at the hands of New York City FC on April 17 before recording a scoreless draw versus the Portland Timbers last Saturday.

Tate Schmitt and Bobby Wood each have two goals to pace Real Salt Lake, who are mired in an 0-2-3 run.

Real Salt Lake hope to receive a shot in the arm after completing the permanent transfer of forward Anderson Julio on Thursday. The Ecuador native collected eight goals and one assist in 30 MLS matches (10 starts) last season.

“I am quite excited to return to Utah, this is what I have wanted for a very long time,” said Julio, who is awaiting the procedural paperwork that will allow him to work in the United States. “I cannot wait to come back and work hard to help Pablo (Mastroeni, coach) and the boys enjoy much success, and to reward the fans for their love of Real Salt Lake.”