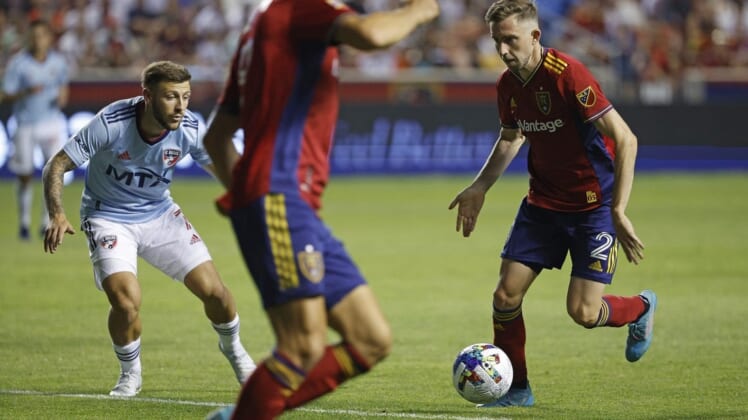 Real Salt Lake will aim to break out of a six-match funk when they visit the San Jose Earthquakes on Saturday night.

Real Salt Lake (9-7-6, 33 points) reside in fourth place in the Western Conference despite stumbling through the 1-3-2 stretch.

Dallas scored in the 14th minute and then backed things up while Salt Lake blasted shot after shot at the net. But RSL put just five of those 25 shots on target.

“It was just one of those games where we could have created 10 more chances and they still wouldn’t have gone in,” RSL coach Pablo Mastroeni said afterward.

Salt Lake may have more success finding the back of the net against the Earthquakes (5-9-7, 22 points).

San Jose has allowed 43 goals, tied with D.C. United for most in the league. The Earthquakes are also on a downslide after dropping consecutive 2-1 decisions to the Houston Dynamo and Portland Timbers and stand 13th in the West.

Last Saturday at Portland, San Jose took a 1-0 lead on Benji Kikanovic’s goal in the 42nd minute. But the Earthquakes allowed second-half goals in the 53rd and 71st minutes and went down in a frustrating setback.

“It (stinks) to say and I’m being blunt but it’s the honest truth. We can score, that’s not the problem. We can score but sometimes defensively, I don’t know if we don’t concentrate enough, I couldn’t tell you what it is, but it’s on every single one of us.”