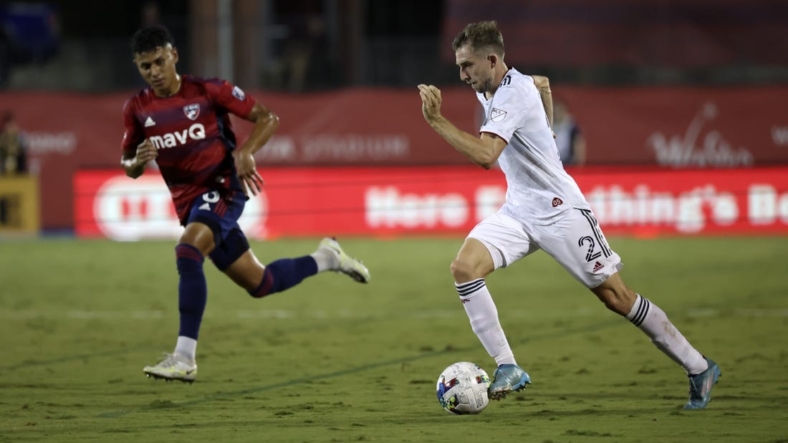 Anderson Julio’s goal on a header in the 69th minute was the equalizer as visiting Real Salt Lake came from behind to produce a 1-1 draw with FC Dallas on Saturday in a key Western Conference match in Frisco, Texas.

Dallas (11-8-10, 43 points) has a loss and a draw in its past two matches after a two-game win streak. Saturday’s draw dropped Dallas into fourth place, one point behind Minnesota, with four points separating it from both Nashville and Real Salt Lake with five matches to play.

Real Salt Lake (10-8-9, 39 points) is 1-1-3 in their past five matches and settled for a 1-1 draw for the second straight game. RSL fell to sixth in the West with seven regular season matches remaining.

Dallas took the early advantage with Alan Velasco pouncing on the rebound of a pass by Paul Arriola in the seventh minute and sending the opportunity past RSL goalkeeper Zac MacMath into the bottom left corner.

Real Salt Lake came close to answering twice in the first half. First, Pablo Ruiz blasted a shot off the post in the 21st minute. Nine minutes later, Justin Meram seemingly had drawn a foul on Dallas keeper Maarten Paes in the box, but the infraction was reversed by VAR decision, taking away a potential penalty kick.

Paes made a critical save in the 66th minute when he leaped to deflect a free kick from outside the box by Ruiz. Paes got just enough of his right hand on the kick for it to clang off the underneath of the crossbar and out.

But Paes could do nothing about Julio’s game-tying goal three minutes later. A cross into the box by Aaron Herrera found the head of the leaping Julio, who outjumped a Dallas defender and deftly directed the header just inside the right post.