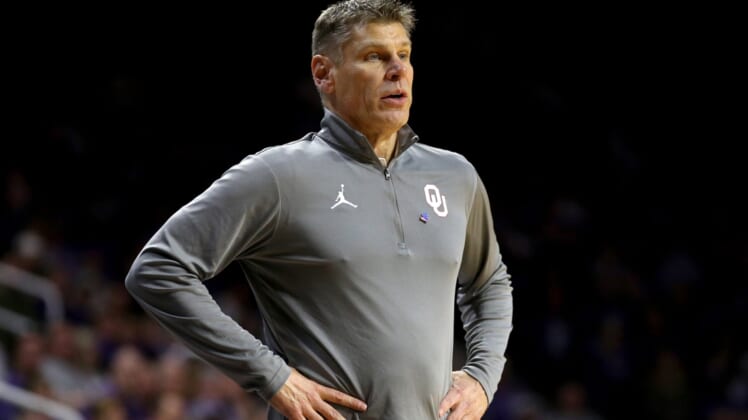 Oklahoma was disappointed not to see its name pop up during the NCAA Tournament selection show on Sunday.

The Sooners just missed the cut, placing second on the “first four out” list behind Dayton.

Instead, Oklahoma is a No. 1 seed in the National Invitation Tournament and will host Missouri State on Tuesday night in Norman, Okla.

The Sooners (18-15) and Bears (23-10) haven’t played each other in more than 17 years, but their coaches are very familiar with one another.

During his last eight years as Loyola-Chicago’s coach, Porter Moser’s Ramblers and the Bears played twice each season in the Missouri Valley Conference.

Bears coach Dana Ford was 3-3 against Loyola before Moser left to take over the Sooners last offseason.

Oklahoma once looked like a shoo-in for the NCAA Tournament after an 11-2 start that included top-15 wins over Florida and Arkansas.

But the Sooners went on a tailspin, losing 12 of 15 games.

Oklahoma turned things around, winning its final three regular-season games and then knocking off No. 3-ranked Baylor in the quarterfinals of the Big 12 tournament before falling to Texas Tech 56-55 in the semifinals.

A win over the Red Raiders likely would have been enough to get the Sooners into the big tournament. Even with the loss, Oklahoma still nearly made the field, but Virginia Tech’s win over Duke in the ACC title game and Richmond’s over Davidson in the Atlantic-10 final gobbled up two more spots.

“This group has the DNA of an NCAA Tournament team,” Moser said. “They’re resilient. They’ve stayed together, and we’ve won these games late.”

Oklahoma hasn’t been in the NIT since 2004. The Sooners missed the NCAA Tournament for the first time since 2017 and just the second time in nine seasons — not counting the canceled 2020 tournament.

Missouri State is making its first postseason appearance in any tournament since 2014, when it played in the CIT. The Bears are in the NIT for the first time since 2011.

The Bears had their eyes on the program’s first NCAA bid since 1999, but an overtime loss to Drake in the MVC semifinals ended those hopes.

“I love coaching these guys, and that’s ultimately why I do what I do,” Ford said. “For me, it’s been a fantastic season. I’ve enjoyed coaching this team whether that’s on or off the court. In regards to how others view it, I feel like we had a good year.”