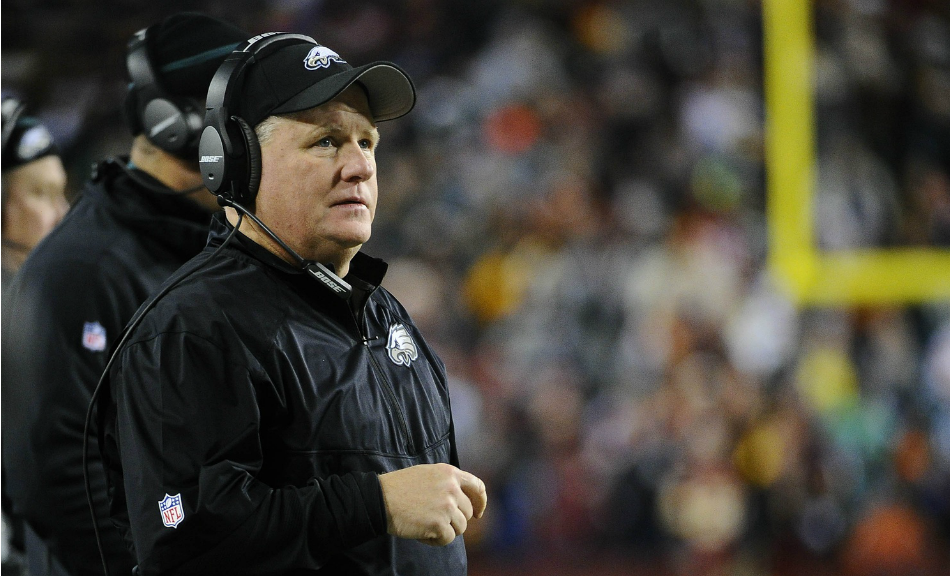 A man with rhetoric and diction comparable to this centuries’ greatest speakers, Eagles head coach Chip Kelly took the podium in Philadelphia to clear the air surrounding his team’s offseason.

Though the conference was league-mandated, Kelly spoke for over an hour, and touched on everything from philosophy to proof that the world was round. Kelly is a spectacle on the podium. A natural speaker with a flair for humorous alliteration, the Eagles’ skipper dispatches reporters inquiries with reckless abandon. Despite referring to the conference as he approached the podium as “my yearly dental appointment” Kelly appeared suave and composed as he finally attempted to clear the air on his team’s tumultuous offseason.

After a flurry of moves recreated the Eagles’ active roster and spun webs of rumors reminiscent of Shelob’s Lair, Kelly’s conference sliced through the rumor mill with a veritable sting. Beginning with the most overblown of offseason narratives, a potential Marcus Mariota trade, Kelly compared the situation to that of Jim Harbaugh and Andrew Luck, mentioning how no media driven narratives were created in that situation.

Chip on Mariota rumors: "It's what makes sports great. You got nothing to talk about on sports radio, let's talk about trades."

While Kelly downplayed the notion of giving up the farm for Mariota, acquiring the Heisman Trophy winner is not out of the question. The head coach was asked about the philosophy behind trading up in the draft, and replied with a quip about the philosophy that once noted the world as being flat “until some guy on a boat traveled far enough and did not fall off of it.” Yet behind this egotistical shot at the media members driving this narrative was a truthful answer.

Re: Mariota — Chip's message was that he's not going to surrender a lot of assets to move up. Consistent about it.(But if Mariota slips…)

Chip Kelly is no fool, he will not mortgage the future of his team for one player. The coach made that perfectly clear when he said that draft philosophy means more picks mean more chances.

Smokescreen or not, Kelly dismissed all rumors of a trade up for his quarterback, at least into the top of the first round. As far as his current quarterback is concerned, Kelly would not commit to anything. The Eagles coach reiterated that all quarterbacks would get reps with the first team offense. It is clear that at this stage, Kelly has come nowhere near to committing to Sam Bradford long term.

Commitment was far from Kelly’s mantra this year, as is currently the story of the undecided future of Pro Bowler Evan Mathis. Rated as the best guard in football by Pro Football Focus in each of the last two seasons, Mathis has been reportedly on the outs with Kelly and the Eagles’ staff. However, the Eagles’ coach evaporated these rumors saying that while he was not actively shopping Mathis, permission has been given to the player’s agent, Drew Rosenhaus, to pursue a trade.

What this means for Mathis’ future with the team is unclear, but it does seem as if Kelly will keep Mathis unless a trade can be made to improve the team in the long term. Regardless, major issues must be addressed on the offensive line prior to the start of next season. Yet Mathis fans should remain hopeful. When asked if Mathis will be on the team next year, the skipper replied simply: “I hope so.”

Replacing LeSean McCoy is nearly impossible, but the duo of DeMarco Murray and Ryan Mathews has as good a shot as any. Kelly commented on his new star running back, saying that Murray was not, as had been previously speculated, a product of missing out on Jeremy Maclin. The head coach explained this by noting the imbalance of his team the past few seasons, top five on offense, and a picturesque opposite on defense.

Kelly explained that the big money this offseason was to be spent on the defensive side of the ball, hence big money to Byron Maxwell but not to Maclin. The skipper also noted that inside linebacker depth was a major offseason focus, hence the deal for Kiko Alonso.  Linebacker is now a position of strength for Philadelphia, but even Kelly says he is unsure as to how Mychal Kendricks, DeMeco Ryans, and Alsono will fit together. Should Ryans prove healthy, it is my expectation that Alonso will move outside opposite Connor Barwin, and both will be spelled by Brandon Graham in situations dictating larger personnel. As with the team’s offense, Billy Davis’ defense is based on versatility, and Kelly certainly has that trait in his linebacking corps.

In addition to the larger issues discussed above, Kelly was also asked about the holes that remain in the secondary, specifically the last safety position. Kelly said the area will be addressed further down the line in the offseason, and also noted that last seasons’ fifth-round pick, Earl Wolff, could be an option. Brandon Boykin’s potential move to the outside was also discussed, and Kelly’s answer was curt and straight forward. The head coach said that every corner had a chance to perform outside last season in practice, and the best players won the job.

What does this mean for Boykin’s future? Byron Maxwell is slotted in at one outside corner spot, but the other will come down to either a draft pick or an in-house candidate. Due to Boykin and Thurmond’s comfort in the slot and lack of size to matchup outside, it would not be a surprise if both of these players were not on the roster when opening day rolls around. Reading into Kelly’s plans for the defense, it appears as if Boykin, a fan favorite, could be on his way out in Philadelphia.

Perhaps the most useless question created the most humorous response from Kelly. When asked the odds on the team signing another free agent, Kelly responded: “What do you want, fractions? Percentages?” Chip Kelly has no time for wasted breath.

Despite entering the presser with the timidity a grave-robber might enter a tomb, Kelly dropped the mic on the offseason narratives surrounding his team. Kelly showed that though he will not display it in full, the former Oregon coach has a plan, and it is in motion. Kelly’s composure and diction on the microphone showed he is unafraid of public opinion, and will be judged by his production on the field not the circus surrounding his team off of it.