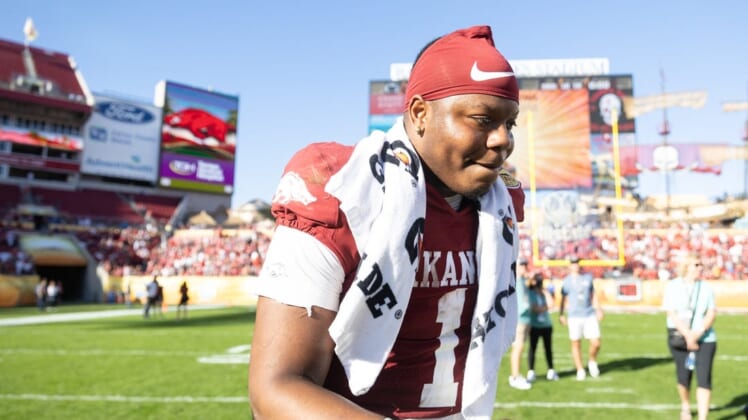 The Arkansas Razorbacks are coming off a nine-win season, including rare wins over Texas and Texas A&M in the same season, and yet the players still feel like they’re a non-entity heading into the season.

And that’s just fine with them.

Razorbacks head coach Sam Pittman is 12-11 heading into his third season in Fayetteville, Ark. He led the Razorbacks to a 9-4 record in 2021 and a victory over Penn State in the Outback Bowl. The Razorbacks hadn’t won nine games in a season since 2011.

But when ESPN ranked Arkansas last in the SEC West in its Football Power Index rankings for 2022, woo pig sooie.

“In the previous years, Arkansas was always slept on, and we’re still dirt under a rug,” redshirt junior quarterback KJ Jefferson told ESPN. “Now, it’s just getting back that workman mentality that Coach Pittman instilled in us, just that blue-collar, hard-nosed, put-your-head-down mentality.

“This program has been on the rise, and we’re going to keep building and get back on top where Arkansas belongs.”

Whether Arkansas can maintain its progress will hinge on how well the Razorbacks handle one of college football’s hardest schedules.

The Razorbacks open the season Sept. 3 against Cincinnati, coming off its College Football Playoff appearance. With non-conference games also against BYU and Missouri State, every opponent on Arkansas’ schedule either qualified for or played in the postseason in 2021.

“I mean, we love it when we get the hardest schedule,” Jefferson told ESPN. “The Las Vegas odds come out and we’re always the underdogs. We love it. It’s just another chance to prove everybody wrong and come out with an upset. So we know we’ve got the hardest schedule again, and it’s put up or shut up. It’s the same as last year. Everybody was counting us out this time last year, too.”

The Razorbacks will also go as far as Jefferson’s arm — and legs — can take them. Jefferson threw for 2,676 yards and 21 touchdowns and led the team with 664 rushing yards and six more touchdowns on the ground in his first season as the starter in 2021. Jefferson, who played at 250 pounds last season, is down to 240 on his 6-foot-3 frame.

“I don’t think a lot of people expected me to do what I did last year carrying 250 pounds,” Jefferson said. “Now that I’ve dropped the weight, I think there will be a whole new explosiveness to my game.”